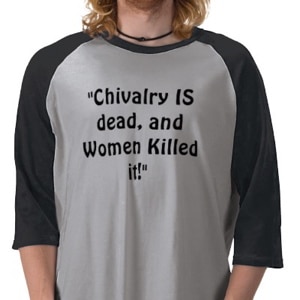 An article by one Ms. Liz Jones laments the death of chivalry, and even prompted a fair bit of commentary by Sadie Stein over at Jezebel. The general consensus is that men (especially those under forty) have devolved into insensitive louts who are consistently rude. Respectfully (no, really), I hereby offer a counterargument. Shall we?

My father’s a preacher, and my mother’s an assistant principal—formerly a music teacher. I was indeed taught to behave well, to be polite, to be a consummate gentleman. My parents (and theirs) put a solid value on showing respect and human decency.

Opening doors, giving up seats, and helping women with baby carriages up and down flights of stairs—all in a day’s work. This behavior has also put me in a position to be ignored, stepped on and largely taken for granted for the past thirty years. “Nice guys finish last”, indeed.

Yes, there have been times (more frequently of late) when I haven’t given up my seat on the subway. I was tired, I was sore, or I just didn’t feel like it.  I’m not about to sit by and let some octogenarian stand, or have a pregnant woman do the same; but I’m also not going to arbitrarily stand up for a woman who’s expecting preferential treatment because she happens to own a vagina. That would be sexist.

In my early days in the city, I was waiting on a crowded platform for the subway. I watched in astonishment as a little old lady pushed her way to the front so that she would get on the approaching train first. She felt she was entitled to special treatment, and was by far the rudest person on hand.

Being polite (and in the minority about it) is a handicap. Put harshly, it demonstrates you’re playing by rules that the majority are not bothering with. It’s the equivalent of a ‘Marquis of Queensbury’ pugilist being woefully unprepared for a sucker-punch to the crotch. The fight is over, and the gentleman lost.

Now; Sadie Stein over at Jezebel witnessed and discounted a man’s offer to give up his subway seat to a woman, because she was attractive. The logic behind this, I can only conclude, is that she was disheartened to see that he was motivated by sexual attraction. On behalf of the male gender, allow me to spill a small secret: Everything we do is motivated by sexual attraction. And the fact remains: being polite does, can, and will never lead to sex.  Manners in a man are appreciated, but they do not make him attractive.

Now here is the crucial point of Ms. Stein’s views: She believes that a man who fails to give up his seat (or similar) to a non-pregnant young woman is rude. I respectfully disagree. That man is not rude. That man is average.

Sadly, being polite is not the standard anymore. It is a bonus, a perk, like a mint on your hotel pillow– it comes as a welcome surprise, but expecting it is an invitation for disappointment. I am not required to be polite, any more than you are entitled to be doted on by strangers.

As for why politeness fell out of favor? I’d suggest that it boils down to this: you can’t be polite and assertive at the same time. Being successful, going after what you want in life requires that you take action and step up.  Sometimes it requires that you get there first. And while I won’t push someone out of the way to do it (unlike some old ladies I know), I also may not have the time to hold open a door for the five people behind me.

Yes. There are real jackasses out there. There are also a few knights in shining armor left in the world. So how’s about we work with what we have, rather than complain about what we don’t?