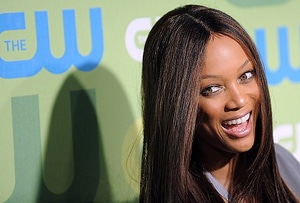 The next top litigated? Ms. Tyra herself.

According to The Hollywood Reporter, a Georgia mom has beef with the model and media mogul, and has filed a complaint against Tyra Banks, Warner Bros. Entertainment, and executive producers of the Tyra Banks show, to the tune of $3 million last week after her 15-year-old daughter, Jewel Ciera Washington, responded to an open call on the show’s website for self-proclaimed sex addicts.

Beverley McClendon, alleges that after being selected, her daughter flew alone to New York the following month, was picked up in a limo and put up in a hotel.

Huffington Post: “This show undoubtedly was watched by sexual deviants, perverts and pedophiles alike,” McClendon argued in the complaint, according to ABC News.

Ms. McClendon also argues that the producers broke Georgia state labor laws by not alerting her about her daughter’s scheduled appearance.

One has to wonder, is Ms. McClendon only worried about the pedophiles, perverts, and sexual deviants now because she now knows about her daughter’s addiction?  Isn’t this a case of too little too late? Hasn’t the harm already been done? Where was she when he daughter was lurking on the web, or crawling out her bedroom at night? Did she just not know? Did she think Jewel was just a kid being a kid?

Not to mention, where did Ms. McClendon think her daughter was for the duration of her trip to New York City for the shows’ taping?

If a 15-years-old, decides to take it open herself to reach out so-far as to go to national television to reveal her secret to a talk show host celebrity, that clearly seems to be a cry for help. Was it a cry that her mother just failed to recognize? Or are children more comfortable turning themselves into mini-media sensations than telling their parents what’s going on in their lives? Hm.