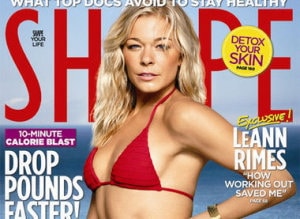 ‘Shape’ magazine editor-in-chief Valerie Latona now says she’s doesn’t regret putting toned cheater LeAnn Rimes on the fitness mag’s cover, the by line which caused so much public consternation involving how ‘working out’ with her married male lover ‘saved’ her from the ‘insanity’ of cheating on her husband.

Originally Valerie Latona stated: Please know that our putting her on the cover was not meant to put a husband-stealer on a pedestal-but to show (through her story) how we all are human. And this woman in particular found strength in exercise in what she said was her most difficult personal moment.

But it did not come across that way … And for that I’m terribly sorry.

But now, like LeAnn, Valerie’s taken to boxing and recently began dodging PR threats, saying her previous statement (that it was “a terrible mistake”) was taken out of context.

Latona today: “I stand by the fact that LeAnn’s story is compelling–and her courage and strength in the face of so much adversity is compelling. That is why I put her on the cover of Shape for what is now the third time.”

While Rimes’ behavior is not necessarily savory, doesn’t the backlash over this article get at the question of why one even reads magazines? Is it not for, as Latona said, ‘compelling stories?’

The question, it seems, is one of the medium; wouldn’t such behavior be celebrated if it had been put on television?

Why is it that we hold print and ‘serious’ writing to the most disciplined and absurd of all standards: that of being boring? Is not this the best way to strangle the medium, to make it irrelevant, especially in the age of the internet?

Stupid times, we could say, call for stupider measures. Hence, you can see, our attraction to tabloids…