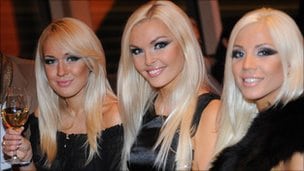 One Lithuanian company blinded with blonde ambition and calling itself Olialia (ooh-la-la) has been a bit busy growing a “blonde business empire” by building a Baltic island pleasure palace staffed only by – you guessed –supersexy bimbos blondes.

BBC: The firm plans to pull in the tourists by employing only blonde staff, and offering direct flights to the island crewed entirely by blondes, including the pilots. …

Though something tells us most of those arriving by air to Glamazonia Lithuania will be choosing alternate means of transportation, how we’ll choose to get their seems a small problem compared with getting the island up and running.

As BBC reports, When it was announced on the Maldivian news website “Minivan” in September, many readers condemned it as discriminatory by potentially excluding non-white Maldivians.

“This is racist and should not be allowed in the Maldives,” wrote one reader identified as Ablo.

But is this an all-too-blonde sign of neglectful corporate planning or is it, rather, marketing ploy with a hidden stroke of that elusive genius Olialia seeks so earnestly to prove itself capable of?

While most critics have been busy arguing over whether or not it’s really sex they’re selling (it is), to argue over what’s apparent is to fall victim to the PR stunt at play here.

What could be more clever than using sexy antics it to stir up a bit of racy controversy so we’ll all want to blog about it? Doesn’t announcing something so outlandish and failing controversially provide one’s company with more exposure and free advertising than managing to pull it off without a hitch?

Isn’t this just a sign of the next generation of advertising, its ’2.0,’  its next frontier aimed harnessing the free labor of the blogosphere?