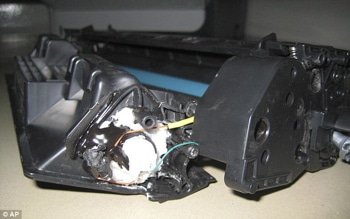 A Yemeni woman has been arrested in relation to packages loaded with detonation ammunition suspiciously originating from Yemen. Media pundits currently link  Al Qaeda as the perpetrator.

In case somehow you missed it, the Daily Mail sums the situation up probably the most succinctly: “A major international terror alert was sparked yesterday after printer cartridges with wires attached were found in cargo hubs at East Midlands Airport in the UK and in Dubai.

The packages originated in Yemen, a key front in the fight against terrorism, and are believed to have contained the powerful explosive PETN.”

Predictably, mass panic, and terror have ensued, online especially. For instance, all the internet’s usual paranoid think tanks have been calling them ‘fake’ and arguing these attacks were set up to coincide with Tuesday’s election day. This, while America’s favorite comedy pundits are, on Halloween Eve, masquerading as politicians imploring Americans to gain back their sanity (and being taken quite seriously).

Doesn’t putting it bluntly make you question how deeply we’ve sunk into a delusional fantasy?

The most ‘terrifying’ thing thus far is the almost religious un-shakeable belief in our current system, by all parties involved, everyone fervently commenting. British PM David Cameron said: ‘In the end these terrorists think that our interconnectedness, our openness as modern countries is what makes us weak.

‘They are wrong – it is a source of our strength, and we will use that strength, that determination, that power and that solidarity to defeat them.’

No word on whether ‘defeating them’ is going to involve another ten years of military action, but we can all agree the rhetoric of a call to arms is always frightening, just as it’s intended to be. Thank goodness we’re working ourselves into a fury and continually increasing international security.