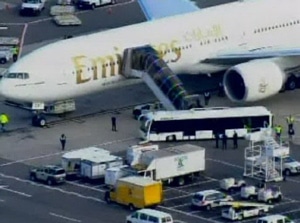 One would be hard pressed to find a situation more fitting than the current cultural atmosphere of imminent catastrophe than this one: two mailbombs from Yemen have been intercepted on their way to Jewish places of worship in Chicago, prompting “an international search for suspicious packages,” which currently has the nation in free fall pause.

While authorities have discovered thirteen other such boxes, saving both lives and physical destruction, psychological damage is still being done.

“Several” office buildings have since been evacuated in Brooklyn, the Manhattan Bridge was shut down, passenger planes are being ‘escorted‘ by fighter jets, and more; all for good reason. Even Obama admitted these are ‘credible threats.’ This terror threat is all our most fantastic fears made manifest. It’s almost as if the air itself is on fire. There could, quite literally, be unknowing actors exchanging explosives all around us.

Which creates an even more difficult problem: how does one deal with such threats without inspiring terror himself? Is it really possible at all? One thing’s for certain, to the terrorists it matters little if the bombs are delivered, either way they’ll induce terror — just as intended.

Whereas 9/11 was an attempt to smash the United States’ power system by destroying its monuments, this attack could be described best by one stupidly contemporary media buzzword: viral; happening from the inside out. With these parcels being delivered by the State itself, the control system, ideally, destroys itself merely by undergoing its own automated maintenance functions.

My critical fear here in even reporting on this is that by doing so I too perform a systematic function, inspiring fear and terror simply by communicating and raising awareness of it. This brings us to quite the terrifying paradox: by not reporting on such events one more effectively combats terror, hence, terrorism, but also stops the American system from properly functioning.

But how is one to attack a virus that spreads by the very act of communicating its symptoms?