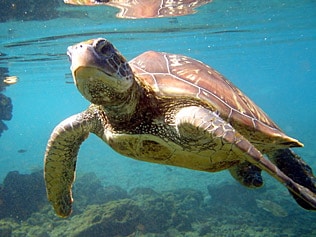 An 8 year old boy is no longer innocent anymore…

News.com.au: A FLORIDA boy remained distraught after watching an alligator feast on his pet turtle when he donated it to a local aquarium park.

Distraught that for one another animal took his love away from him but distraught that at 8 years old he would no longer believe in sugar puffs, snow flakes and that Santa Claus comes down chimney pipes.

Crunches from the turtle’s shell were heard by Brenda Guthrie and her eight-year-old son Colton as the alligator devoured the family’s pet last Thursday.

A distraught Colton begged the alligator to release the turtle, called Tomalina, with no success.

Because you can beg Santa to come and visit you, and if he doesn’t you can always dream that away, but then again how do you dream away the sound of the most important thing in your life been chewed to smitherens in front of you? Even if the alligator was just doing what comes naturally to it.
The family donated the pet to the Gulfarium in Fort Walton Beach, Florida, when the turtle grew too large for her home aquarium, the report said.

They reportedly chose the Gulfarium so that Colton could come back to visit Tomalina whenever he wanted.

Officials at the water park said it was uncommon for the gators there to be interested in turtles.

Uncommon perhaps, but that’s the not the most easiest thing to explain to an 8 year old boy who has just had life metaphorically snap its jaws mutilated across his soul.