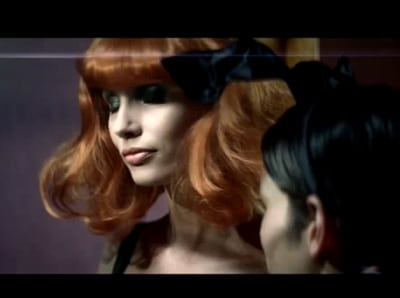 WWD suggests that part of the problem is marketing strategy. “[W]hile the London Sunday Times Style magazine ran a behind-the-scenes video of the campaign shoot on Sunday, unlike most fashion campaign news it didn’t instantly do the rounds of bloggers and other news outlets, thanks to it being hidden behind Rupert Murdoch’s newly imposed pay wall.”

Maybe. Or maybe Agent Provocateur has simply failed to provoke. Watch the video yourself and you’ll quickly see that the brand is having it both ways – a sexless sex tape cloaked in artless art. Star Kirsty Hume’s small breasts are meant to signify a classier brand than your mall’s Victoria’s Secret, and the not-so-surprising role reversal at the end is supposed to be cleverly subversive. Shocking, I’m sure.

“Betty Sue” isn’t interesting. It evokes sex with the most obvious, boilerplate imagery, and those throwing around the David Lynch comparisons need to dust off their Twin Peaks DVDs for a reminder of how Lynch sexualizes the genuinely deformed and bizarre. Club Silencio this is not.

And for those who are wondering how Lynch would actually do a high fashion commercial, you need only look as far as this May’s Dior film, Lady Blue Shanghai. An imperfect work, perhaps, but incomparable to what’s passing for art around parts of the fashion blogosphere these days.