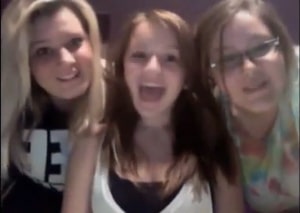 In what will likely be remembered as the first great instance of 21st century iconoclasm, three teenage girls on Twitter have now torn apart their posters of Justin Bieber, stating defiantly for the whole world that they are now ‘over’ him. Has American social media ever achieved a moment of more prescient foreshadowing?

The video, posted by revolutionary youth leader in training, Sydney Dalton (known by her enemies only through her initials, STD), quickly became a sensation for its of skillful manipulation of unpretentious girl power and the apparently earnest belief that the whole world would care about their sleepover rampage. Oddly enough, we do; as young ‘Beliebers’ (thank Gawker for that hideous neologism) almost instantaneously began violently defending their golden calf American idol.

Tweet Soup reports that One fan posted “you fat whores! that was probably a good workout, wasnt it? ur fucking public enemy #1.” All this blind rage, verging on self-important sadistic ecstasy should have the more curious among us wondering: have celebrities, for our youth, finally become equivalent to icons in the old, even religious sense of the word?

The overly theatrical video, enjoyable for the masses mainly as an unintentionally campy send-up of everything stereotypical about female tween angst, is more revolutionary than at first meets the eye. And, as is often the case when a culture’s most beloved icon of veneration is ritually shredded and uploaded to Twitter, we can already spot all the first hallmarks of a real sociocultural, or possibly even religious revolution: hate-mongering, death threats, and even the alleged ultimate of all ‘internet evils’: cyber-bullying. To think, if only these kids could stay up past their bed times…

Gawker: Unsatisfied with simply attacking Dalton on Twitter, one girl named Hannah decided to upload a video of her own, in which she tells Dalton, “If I ever meet you in person, I’m gonna hit you in the fucking face with a full wine bottle—cork and all!” among other profanity-laden threats.

At one point, Hannah who seems surprisingly comfortable in front of the camera asserts “You can’t get famous for posting videos of your ripping posters apart and throwing them in the trash, OK!” Is not that sentiment, like, so 20th century?

Who says teenage girls can’t affect the world with all the same violent cultural force as revolutionaries such as Martin Luther or even Che Guevara. This is the age of Aquarius social media.