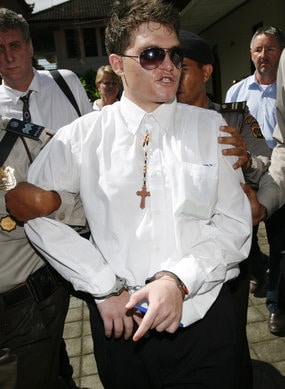 The moral dilemma of a young Australian caught smuggling the good shit.

For those of you in the know, Indonesia has a zero tolerance for drug use and further more a deadly tolerance of those caught in the dealing of narcotics. Enter young Scott Rush who has embroiled Australian authorities who are trying to get Scott’s 2006 death sentence remuted back to life. Do they have a chance?

Sydney Morning Herald: Indonesian prosecutors have asked that drug mule Scott Rush be killed by a firing squad, arguing that the Indonesian community would want the harshest possible punishment for his role as a courier in the Bali Nine heroin smuggling syndicate.

In a 14-page submission to a court in Denpasar, Bali, the prosecutors argued that the notion that Rush was merely a courier was not a consideration in the Indonesian legal system.

Granted Scott Rush is guilty, but the question remains, should Rush’s life be spared because this was a first offense and that no matter the severity of the punishment one can argue if statistics are a guide that drug smuggling will always be a way of life in South East Asia and if the Indonesian government hopes to quail such activities the severity of life imprisonment should be enough of a deterrant to anyone contemplating such an act.

In an unprecedented act, former Australian Federal Police chief Mick Keelty and current Deputy Commissioner Michael Phelan travelled to Bali to testify for Rush this month, telling the court he was a low level courier on his first overseas trip who did not deserve death.

But the prosecutors argued this testimony did not constitute “new evidence”, as argued by Rush’s lawyers and required by law in Indonesia to launch a judicial review.

They added that Rush had harmed Bali’s reputation as a tourist destination and endangered the local economy.

What would perversely be endangered as well is the negative pall that this would cause between Australian authorities who have held a tenuous relationship with the Indonesian government over the years (one could even wonder if this is payback for some of Australia’s own harsh policies concerning boat people who have traveled to Australia looking for clemency ) and not say other tourists who might fear themselves innocently or not being caught in future events.

In a shock decision in 2006, the Indonesian Supreme Court upgraded the sentences of four members of the Bali Nine drug ring from life to death.

Three of those four – Matthew Norman, Si Yi Chen and Tan Duc Thanh Nguyen – had their sentences revert back to life after a judicial review.

No matter the law of the land the question remains, should Indonesia consider the ramifications of an admittedly harsh penalty or should we just accept the day one becomes a drug mule they are literally playing with their life.