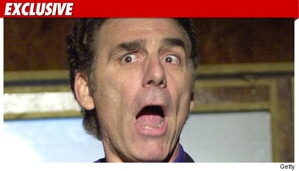 In a situation that sounds more than slightly like a storyline from from the 90s sitcom Seinfeld, reports have surfaced that the sometimes mild mannered Michael Richards – better known as Cosmo Kramer“allegedly unleashed a devastating ass kicking on a photographer,”TMZ. – is now being sued after he says

The TMZ report continues, saying According to the suit, photographer Brendon O’Neal claims Richards approached him on an L.A. street on August 25 in a “menacing manner … with closed fists” — then proceed to beat the crap out of him.

In the suit, filed Friday in L.A. County Superior Court, O’Neal claims Richards punched him in the face, knocked him to the ground, and then “proceeded to kick [O’Neal] numerous times, directing the blows to [O’Neal’s] arms, hands, and camera.”

Richards is one of those unfortunate actors we find it easier (or maybe funnier, if not more fitting) to call by the name of his character, and, one whose personal life has lived up to the outlandish standards set by his comic-relief counterpart.

Though “The lawsuit gives no explanation as to what triggered the alleged beating,” we can, and probably should, wonder if it had more than just a little something to do with the love-hate relationship Richard’s surely feels for the Kramer character he’s so often associated with, if not mistaken for.

We could say that it’s, if anything, unfortunate that every time Richards comes close to living down the almost mythical role of Kramer he does something so, well, Kramer-like. His character has consumed him, just as his characteristics have consumed us…

Of Kramer the Washington Times (by way of Wikipedia) said: Kramer is an attitude. Kramer ‘s revolutionary far more than he’s “funny”. He’s liberating, a one-man guide out of stereotyped sitcom behavior toward the nut-ball stuff that really happens.

Is this not, more or less, the exact description of what we love so much about reality television?

It, then, shouldn’t be surprising that O’Neal claims he suffered “great mental, physical, and nervous pain and suffering.” I mean, could anything short of prison rape be more traumatizing than suffering a particularly vicious beating at the hands of your favorite reality-TV character? And could anything be realer…