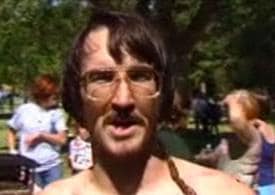 With the recent redefinition of the prerequisites for instant American celebrity excess success, Hollywood and its cock eyed twin brother the tabloids have been scrambling to create a new subcategory of the American Dream to account for quickly closing class boundaries.

Enter the new working man’s American Hero, Jacob Isom, a Koran swindling everyman who thanks to devout fans (he never knew existed) has achieved the impossible but very desirable status of becoming his own one trick PR stunt monkey.

In the hyper-stylized barrage of middle-class made auto tuned mash ups, Facebook pages, tumblr accounts, and even Che Guevara Style t-shirt pressings following the development in which Isom’s Koran snatching story went viral, it appeared Jacob Isom could have anything his little heart dared dream of, which only had us gasping when Isom finally came clean with what he wanted.

Isom to Gawker: “I want to be in High Times. Can you put that in your article? I tried to call them, but you have to use the internet, and I don’t know if they’ll call back. That’s why I was so excited when you called. I thought it might be them, calling back.”

In predictable fashion, our new hero did indeed end up appearing on High Times’ website pushing the stoner mag’s memorabilia with psychedelic catchphrases like ‘Quran–snatch!’” Which has had the effect of having every stoner pleading with Isom to “Please dude, can you please pass along the bong?”

But like every party, eventually all the liquor bottles have to be cleared along with all the used bongs, which has us wondering, will anyone be sober enough to start wondering why a Yale-bred ‘discovery’ (irony intended) like Cassius Marcellus Cornelius Clay (our new heart throb if you must know) gets his own shoe line along with  the requisite invitations to celebrity banquets for contributing nothing to society other than loitering by the Barney’s bowtie tables with a pocketful of fifties, while someone like Isom who’s almost entirely sucked up three days worth of American online artistic production has to practically beg a trash peddler like Gawker to realize his fantasy of providing free viral advertising to High Times, save, of course the conciliatory prize of a a few crusty magazines and some resin stained t-shirts.

If he’d been an upper crust Yalie, don’t you think he’d partying with Paris, Kanye, and CMCC at a Manhattan gallery opening at this very moment? Could it be that we’re now attempting to make American classes into castes from which no movement is possible by abjectly glorifying absolute middle class averageness?

Gawker: He’s now 23 and works at a pizzeria. “If people want to make fun of me for that,” he says, “they should know I enjoy cooking pizza more than they enjoy their office jobs.”

What better way to deliver the following moral to the average worker: be happy with what you have, because you’ll never be one of ‘us.’