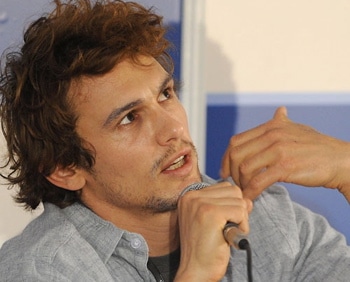 As though the Heidi Montag/Karissa Shannon Sex tape film didn’t have us all already playing with ourselves enough in all-consuming anticipation, in a recent interview, James Franco admits he jerks it ‘four or five times’ a day.

If there’s a twist to this story (there always is) it’s that these statements seem to be made to promote Franco’s newest movie, ‘127 Hours‘ (it’s working) in which the actor portrays adventurer Aron Ralston, who rose to fame after being lost in the mountains (for 127 hours of course) before freeing himself by chopping off his arm.

There’s reportedly a scene — fabricated for the movie — in which the actor rubs one out (I see the lines at the box office forming already) before proceeding to saw his arm off with a dull knife. Talk about drama!

If we can be sure of anything after all this coverage that little Jamesies’ much attended to peen’s been getting, it’s that the American public is all for for watching a James Franco solo show, or five of them in a row, if he has the stamina (we’re betting he does)… but this is probably just a bit too, shall we say, kinky for mass consumption.