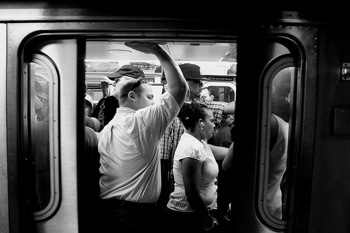 No, it’s not other New Yorkers but tourists (ie non New Yorkers ) and other unimaginables.

In today’s NY Gutter Post, our favorite journal (they really do have stellar trash journalism kids, which is why we read them religiously and why you should too) decided to find out what annoys us New Yorkers the most. Curious? Us too, but please can you get out of the way, you’re gawking is blocking everyone else trying to read this article imbecile… 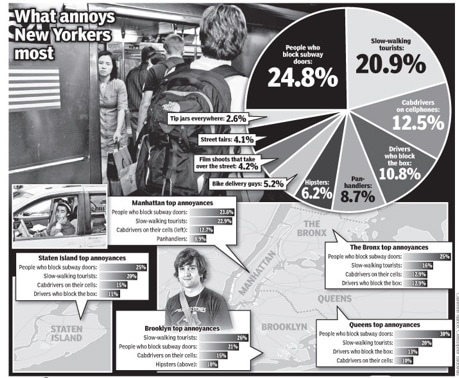 “It’s a hospitality issue,” Rashaun Simon, 23, a Williams-Sonoma store clerk from Jamaica, Queens, said of the subway offenders. “They’re the same people who don’t give up their seats to pregnant women.”

Of more than 300 city residents surveyed, one quarter pinned subway door blockers as their biggest pet peeve, followed by a fifth that chose slow-walking tourists and nearly 13 percent that named cabbies who gab on their cellphones while at the wheel.

Interesting. Subway dawdlers, street dawdlers and cabbies speaking in foreign dialects while taking us to our boite. How rude? We would have thought, the rents, the strange people we have to share the elevators with (but then again I live in a building where there is rampant drug dealing..oh well) and all that baloney about how fantastic everyone in NY is.

Bad drivers. Check. Hipsters. No- we are not allowed to dislike hipsters, they give meaning to vapid teenagers migrating to Bedford avenue in search of a grunge rock band and a $17 caffe latte. Bike delivery guys- check, unless they are hipsters, then they get a pass and ubiquitous tip jars- hey you bitches how do you think I pay my rent around here?

Brooklynites had a special dislike for slow-walking tourists, placing them ahead of the subway-door blockers and cellphone cabbies as the most infuriating thing about city living.

“I hate the slow tourists that stand in the middle of the way,” said Ashley Milling, 21, a student from Bedford-Stuyvesant, Brooklyn.

Brooklynites are also tired of the trendy — hipsters irk 10 percent of the borough’s residents.

“Property prices go up because of them. They wear those tight pants, flannel shirts, suit jackets, man purses, and there is no need for a scarf in June,” complained Greenpointer Corey McSweeney.

Mmh, how can you not like a hipster not wearing a scarf in the middle of summer? It’s part of the mock irony of 8 million people congregating in a city for that sliver of fame, stardom and a hard wad of cash.