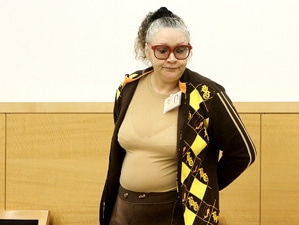 It seems to give a new meaning to taking out the trash doesn’t it, kids? You don’t want to deal with your deadbeat, handy man boyfriend, anymore?  Just duct tape him good, stick a plastic bag over his head, and voila! Problem solved.

That’s what luxury-loving, Raquel Glenn did.  The 55-year-old, Brooklyn woman, met her handyman beau  Chiwa (Freeman) Chan, at the Lenox Hill Hospital psych ward, charmingly enough,  and after he tried to leave  her for her money-hungry ways, Glenn did what any jilted lover about to lifestyle would do; and will now spend seventeen years to life in prison to pay for it.

She listened to voices in her head, and suffocated Chan with duct tape and a plastic bag. Police found Chan dead in a chair in his Bensonhurst home. It was insanity that led Glenn to kill; however, she claims it was greed. Assistant District Attorney Michelle Kaminsky explained to the judge

NY Daily News: “The (state-appointed) psychiatrist was of the opinion the defendant committed this crime, not because of any psychiatric condition, but because she was angry at her current circumstances without any money and without any prospects of getting any – and she took that anger out on Freeman,” she said.

Claiming that she used to be a stunning beauty, Raquel Welch Glenn, explained that her younger years in Washington were anything but poverty-stricken. She claims to have only dated wealthy business men. Even as recently as 2006 Glenn was happily taken care of by her sugar daddies. One man even setting up a trust fund for Glenn valued over $100,000 that she rapidly depleted.

After being kicked out of her boyfriend’s apartment, she checked into Lenox Hill and met her next victim Chiwa Chan, who was being treated for bipolar disorder. Chan, 45, was a lifelong handyman at a Manhattan building, and even took out at $50,000 home equity loan to pay for Glenn’s spending.

“The defendant in her psych interview talked about this with contempt, how she had never been with a blue collar worker and her disappointment at ending up in the bowels of Brooklyn, coming from the upper East Side of Manhattan,” Kaminsky said.

Alas, the life of the working class hero; ending up dead in your chair with a bag over your head. Tragic.