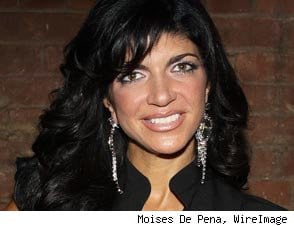 Can someone throw us a bottle of champagne to celebrate with Teresa?

Surely there have been times when you thought to yourself- You know life isn’t going too well, I’m being evicted, my partner is suing me for everything under the bedroom mattress and somehow I’ve got to come up with the 3 gazillion dollars the credit card company boy toy keeps calling me about every day or my ass is on the street. The obvious solution? Spend more – which is exactly what guidette NJ Housewife Teresa Guidice ended up doing this weekend. Unfortunately she’s back to being miserable this Tuesday morning….

Well it all kind of makes sense. After the first $8 million debt there is no way in hell you’re ever going to pay back that stuff, so what’s an extra $60 000 on champagne, a couple of curtains and an all you can eat at Vito’s Lobster house down the road? Heck I’m even thinking of blowing this months rent on a pair of ivory fish bowls I came across whilst whiling away down the street last night…

Let’s hope unlike her pal- Danielle Staub who’ll probably be forced to put out another sex tape (to stay afloat) now that she got fired that Teresa stays in the producer’s good graces ohterwise it’s going to be a long time before Teresa drops another $48 million on a lobster roll and trinkets.