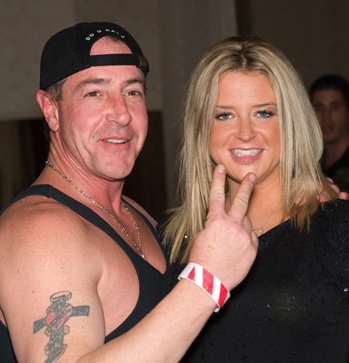 The Lohan family is one very happy mess.

You couldn’t script this in a movie, but then again who needs script writers for America’s very favorite preferred media whore family – “The Lohans,” where every minute is a diary entry in the pads of the Guiness book of incredible adventures and human beings.

That said, the newest adventure concerns Milo (Michael Lohan-he’s the one Lindsay Lohan called her ex-father as he was grovelling in front of the television cameras while her ass on the other hand was being hauled to a prison cell)- who is in deep shit for striking and abusing his fiance- Kate Major. Which has us wondering, will it take no time before Kate calls Milo her ex- fiance?

D listed: Michael’s fiance Kate Major went to the police earlier this week after he allegedly Mel Gibson-ed her ass by calling her a cunt before kicking her in the face. The Southampton Police Department in New York has charged Michael with second degree harassment. A judge also threw an Order of Protection at Michael barring him from trying to get at Kate in any way.

In the police report, Kate states that Michael flipped out at her, because he’s afraid she’s going to leave him: “My fiance Michael Lohan came home while I was sleeping in a sofa chair. He woke me up, yelling, ‘Why didn’t you pick up your cell phone, you stupid cunt.’ He then turned over the chair while I was still in it, tossing me to the floor. I crawled to the other side of the room to get away from him. He walked over to me, took his shoe off and kicked me in my face while I was still on the ground. He stood over me and said, ‘I’m going to go back to jail cause of you, cause I will kill you.'”

Tonight when I lay down to sleep I’m going to dream of a very happy wedding party, Michael Lohan will be longingly staring at his new media whore from the altar, Lilo will be sniffing dried confetti flakes from confession and Dina Lohan will be slicing her wrist with a Carvel ice cream cone.

Michael, Lilo, Dina and now Katie Major – I now pronounce you America’s favorite train wreck.You may now beat the crap out of each other.