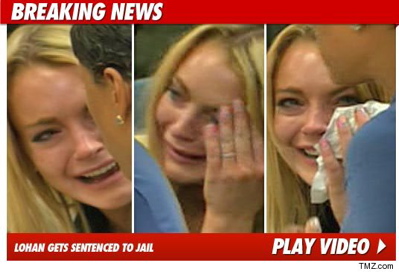 The self implosion finally comes home…

‘I did the best that I could.’  These are the words that Lilo uttered in between emotional tear flood gates as she addressed the court this afternoon upon receiving a 90 day all expenses paid excursion to the slammer to be followed by another 90 day all excursions paid house in house stay at the local rehab unit.

Sweet victory to a nation watching in self disbelief at the Lilo can do almost do anything adventure. At least Lilo can finally rest in peace in the acknowledgment that she wasn’ t really immortal in the first place even if the coco pops she liked to play with made her think otherwise.

TMZ: Judge Marsha Revel sentenced LiLo after an incredulous prosecutor, Danette Meyers, told the judge that Lohan has been thumbing her nose at the court.

The evidence was loud and clear today — Lindsay violated probation by failing to attend her alcohol ed classes based on the schedule set by the judge.  There were lots of excuses, but ultimately they didn’t fly.

The judge said there was a pattern of violations since Lindsay was placed on probation in 2007 following her plea bargain in her DUI case.

Lindsay broke down as she addressed the court, telling the judge, “I did the best I could.”

Lindsay dissolved into tears when the judge imposed the sentence.

Lohan must surrender on July 20 in Judge Revel’s court.

Lilo in her own wonderful way this afternoon managed her own wonderful amazing performance in front of the judge, grabbing at excuses and other false hoods before finally realizing that she had indeed been thumbing her nose at the court system, America and ultimately herself. How ironic that the public can now sigh in relief that there is a justice, despite the injustice of ever having held the 23 year old girl to loftier expectations that she was ever capable of in the first place.

What type of nightmares will Lilo have tonight?

Today Lilo is going to hell.