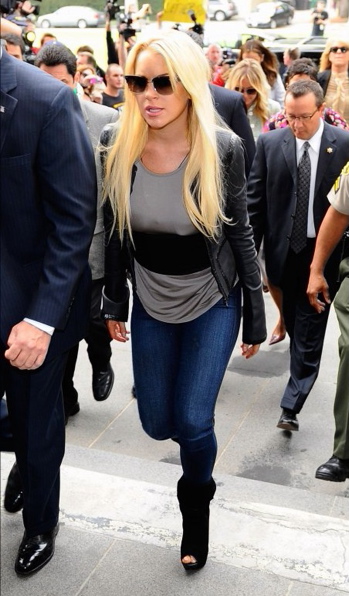 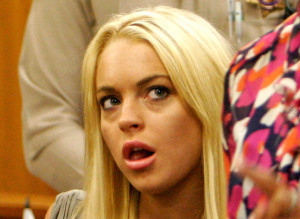 Will the world survive without Lilo for 90 days?

And it’s finally come to this- America’s preferred media whore carries her cross to LA county jail. Oh the woe, the jubilation, the confusion, the rumors, the slander, the finagling, the rampant tresspasing and the ill behavior of little Ms Johny come lately teach me how to survive without a camera in my face:

Huffington Post: BEVERLY HILLS, Calif. – Lindsay Lohan was taken into custody Tuesday — a bit late, but without incident — to begin serving her jail sentence for a probation violation.

The actress rose and was handcuffed behind her back after a brief hearing. She arrived at court about 10 minutes late, prompting Los Angeles Superior Court Judge Marsha Revel to begin calling other matters.

The possums in the background silently whimpering, the drug lords commiserating and the media heads wagging their vinegar bleached tongues collectively. Ten minutes late? For any other person that’s like saying Lilo was 14 hours too early. Pass me my kleenex tissues you heathen. Better still Lindsay let me share yours. I have tears to bleed this afternoon.

Lohan, 24, was accompanied to court by her mother, Dina, and younger sister Ali, who wiped away tears after her sister was taken into a lockup for the 90-day sentence, which is likely be shortened in part because of jail overcrowding.

Her father, Michael Lohan, yelled, “We love you Lindsay!” as his daughter was led away.

Her new jail mates crooning their head for their new impending celebrity friend, Mother Lohan in disbelief and Papa Lohan in need of his own trip to social rehabilation. Laugh all you possums, but this my dears is a real tragedy. A tragedy better than any reality show could ever give. Stop grovelling girl and pass me another tissue.

She will be forced to wear a jail-issued jumpsuit and be given a set of simple toiletries that all inmates receive: toothbrush, toothpaste, soap, comb, deodorant, shampoo and shaving implements.

And while Lilo is locked away we too will be locked away, wretched with grief that we let our little darling fall down this treacherous fox hole.

One night while Lindsay will be trying to get some sleep, inhaling dry soap flakes she’ll look at her reflection against the window bars and promise herself one day she’s really give us the award performance she always meant to give.