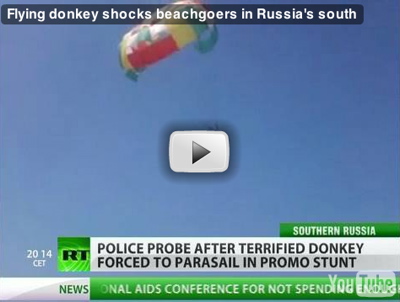 The things that go flying over Russian sun bathers.

Mmh. This one is a doozy, and that said we suggest you buckle yourself in your favorite rocking chair, swallow some of your favorite medicinal pills as we reveal to you the experiences of Boris the parasailing donkey. Please no braying!

Huffington Post: Sunbathers in southern Russia were shocked at the sight of a donkey which “flew” over the Azov Sea this weekend as part of a promotional stunt.

Amateur video footage shows men attaching a parasail harness to the mule before launching it from a beach near the village of Golubitskaya. Beachgoers were said to be distressed at the slight of the donkey, which brayed in fear as it soared above the bay for about half an hour, according to Russia Today.

Hmm- this reminds me of the time a few of my friends and I took my pet dog Sparkles when I was a young boy to the beach and tried to coax him to come swimming with us. We tried everything, throwing sticks in the water, skidding him along by his leash, but had I known then what I know now- I would have rented a parasailing outfit, put Sparkles in a gurney and watch the little critter yelp his little life away as we sat there 30 000 ft below ground level as Sparkles dreamt of dog heaven. Which is not to say that I don’t doubt for a minute there’s a donkey heaven too. Which must infer on some level there must be hell for certain humans too.

The donkey was said to be visibly shaken, but unharmed. Russian authorities are now vowing to launch an animal cruelty investigation on the stunt’s organizers, said to be employees of a Golubitskaya leisure firm. If convicted, the group could face up to two years in prison.

Two years in prison? That’s all. I’m sure Boris would like to see them sent to the slaughter house. just joking….sort of…