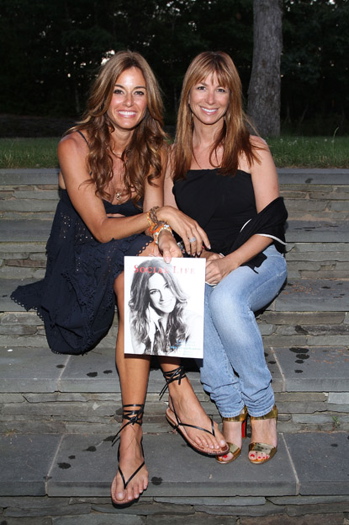 The strange things that are happening this summer… Even before I begin writing this I know Ms Devorah Rose is going to want to wring my neck when she wakes up to read this little story but I’m afraid I’m rather too beguiled not to write about it.

This past Saturday, July 3rd- I was under the impression I would be having a dandy cavalier time at the estate of the Social Life magazine, unfortunately such thoughts were banished when I  stepped out of the car I had arrived with social fixture Kevin Alexander. There in front of us stood a deranged looking woman atop of the Social Life front lawn, where the kerb meets the road brandishing what I initially thought was a broomstick. Of course it become rather odd to see the broomstick aimed at my kneecaps, say the way a hunter would aim his or her gun at their prey. That’s when I realized the broom was in fact a shotgun.

From the distance one could hear the rowdy guests, the clinking of glasses, the laughter of Kelly Bensimon somewhere deep in the void and the pitter patter of my heart as the mad woman started approaching us. In such moments one can never be entirely sure what will come of anything and how remarkably fragile life is. The idea of dying for the sake of Devorah and Justin Mitchell (Social Life Magazine’s publisher) caused my head to swell, romantic notions aside and the creak in my shoe to get louder.

As the wild frustrated lady of the Hamptons estate spoke she demanded that we get back in our car, get back to our hideous lives in Manhattan and for all of us to leave her collectively alone. It had it seemed come to this- another year of rowdy parties courtesy of the estate and the mad woman was that much closer to her breaking point. A cursory look around the road saw cars as far as the eye could see, not a soul to save us and Mr Kevin Alexander wisely calling the police to beseech this incredibly irritated woman.

From there we entered the premises, a phalanx of security check points, a consortium of eye popping photographers and the visage of Kelly Bensimon smiling deeply into someone’s camera, Jill Zarin hissing, Justin Mitchell wearily greeting his guests and Ms Devorah Rose I presumed by the pool patronizing her guests.

As I stood there in the auditorium, a cacophony of commercial interests and product endorsements ad hoc I decided to call Mr Christopher London, Social Life Magazine’s Society Editor to see if he himself had come across a mad woman by the front lawn.

At first amused, he listened, waiting for the punch line when for a long moment he said nothing but a solitary – “Jesus Chris.”

He then proceeded to explain to me the contentious history of the locals, the previous run ins, shouting matches but never the display of shotguns. It seemed the summer of 2010 was really going to be a hot one. At least Mr London had exercised some discretion and had chosen to stay home…

At this stage the party ambled along, guests greeting each other, the visage of Absolut Vodka display girls and guests a jarring juxtoposition. And then the music stopped, the food being served wrapped away and the look of Justin Mitchell suddenly askew with the arrival of police. By now the party was over and Social Life magazine’s publisher in arrears to the tune of $400 courtesy of fines he received (as opposed to an immediate summonsing to the police station which he was relieved to have avoided) and the camera once aimed at Kelly Bensimon and co firmly packed away.

So much for neighbors with shotguns and short tempers…at least next time when I come back to the Hamptons, I’ll know to bring my pitchfork.