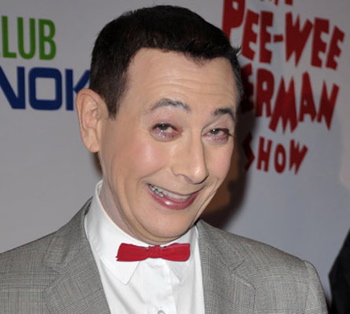 One day Pee Wee will die and the world will be free.

Pee Wee must have received a love letter from his fairy god mother recently because he’s decided to take a break from visiting all his favorite adult movie houses in the South of Nebraska and land in your living room. Should you be excited to see a 58 year old man play the part of a 9 year old boy? Let’s find out…

Variety: Judd Apatow is developing an untitled Pee-wee Herman feature for Universal that Paul Reubens is writing with thesp-scribe Paul Rust (“Inglourious Basterds,” “I Love You, Beth Cooper”). Apatow will produce through his Apatow Prods. banner, though he will not helm the project. Pic is described as featuring the iconic geek — known for his love of toys and nerdy catchphrases like “I know you are, but what am I?” — in a road pic built around “a gigantic adventure.”

His love of toys which include lube motorized devices that Pee Wee circulates to that part of his torso where funny noises can often be heard if applied in tender fashion. As for nerdy catchphrases- shouldn’t it really be? – ” That’s a banana for my piranha.’ We’re sure you can figure out for yourselves what that means.

“Let’s face it, the world needs more Pee-wee Herman,” Apatow told Daily Variety. “I am so excited to be working with Paul Reubens — who is an extraordinary and ground-breaking actor and writer. It’s so great to watch him return with such relevance.”

Ground breaking actor? And returning with relevance? Is that like saying just because I can come across a stale piece of bread from last week’s cupboard and hoarding a spoonful of cheddar cheese that it’s relevant and good for you?

The world is getting more immature by the day, disorderly and dominated by the hoopla of a retinue of revolving reality stars whose reality involves getting you to pony up as much cash to their favorite causes- themselves. Let’s be glad that Pee Wee has re joined the club of relevancy. A banana for my piranha indeed…