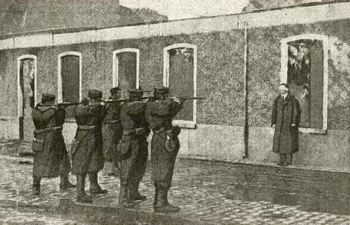 For the 3rd time in 33 years a prisoner was executed in the United States by a firing squad. After a quarter of a century, convicted killer Ronnie Lee Gardner was executed In Utah at 12:20 am (2:20 am ET).  After spending time already for a previous murder, Gardner received the Death Penalty after he was convicted again, for murdering attorney Michael Burdell.

Utah is the only state left that can use a firing squad as execution for men given the death sentence. However only 4 men are still eligible to choose it since they were sentenced before the state switched to lethal injection in 2004. So what people should hope is that this is the last case of Execution by Bullets in the state of Utah’s prison system. Of course, that is the wish by only some.

The Death Penalty is a controversial issue amongst a lot of people. Is it morally or ethically correct? Does the victim feel pain?  Was the victim incapable of rehabilitation? Is it really a punishment for a criminal? Then questions can be thrown in an even further discussion based specifically on what TYPE of capital punishment is ok or humane.

What people fail to realize or remember is that these criminals, when sentenced, are being judged based on their actions for that specific case. It is similar to the fact that first impressions say a lot and can/will decide the rest of a relationship. That person, at that time, murdered/killed/took the life of another human being- In Gardner’s case, two human beings. Should Gardner have been executed? …In my opinion- Yes. Should he have been rotting for 25 years- No.

Those 25 years Gardner spent in prison were not only funded by our US dollars but gave Gardner a lot to think about. It also gave him opportunities to realize that he should not have asked for a firing squad, therefore try to appeal it numerous times-which obviously got denied. If a man or woman were sentenced to the death penalty, why let them rot? The extended period of time has given nothing to the criminal other a due date…it’s the families of the criminals and victims whose psyche is really being effected. They are either waiting for the murderer of their loved one to finally be put to rest, or are waiting for their loved one to be murdered.

The saying goes that “time heals all wounds”, however in these cases they do not. They are like scratch that hurts when you begin to even remotely think about it, let alone touch the issue. Humane or inhumane is not the question, the real question is when. If a person is sentenced to the death penalty it should be dealt with quickly. Not the next day, but a reasonable time that is not 25 years. Because then and only then, will “justice” be served to the lost ones, and healing can begin for the inmates family and friends.