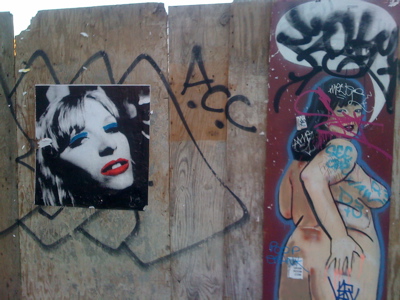 My guide Steve, a local artist and I then proceed to navigate down Morgan st, the Bedford Ave equivalent of Bushwick, equivalent in the sense that even here in no man’s land you can find $10 pasta sauce where we come across a collective of hippy types doing hoola hop tricks, while managing to maintain the requisite American Spirit in their mouths. A cursory regard has us wander into Roberta’s pizzeria where a photogenic gangly set are packed deep munching on gourmet pizza (another weird irony if one is to believe the idea that struggling artistic spirits only eat ramen noodles dipped in chillie sauce) while the other half of the venue is getting plastered in the outside courtyard with disco music and the enthusiastic come on of a bartender sloshing cabooses of alcohol down his customers throat and then imploring them to spit it into someone else’s. As funny as this is, I can’t help thinking the night before the very same behavior was going on in some Upper East side bar with the frat pack- even if the kids here were in the business of wearing dog collars as opposed to Polo T’s.

We then connect along Knickerbocker, a morose collective of bodegas and the very first sushi store which Steve predicts will become the death of the district and the silent affirmation that somehow this gritty dive that most people with half a brain avoid will no longer avoid. That’s not to say what goes on here isn’t interesting, but more in acknowledging that the district is physically gritty, barraged by factory proto types and depressing store fronts and the occasional graffiti outtake not to mention the sketchy public transport service in getting out here in the first place. There is after all a reason why up to now it’s been so cheap to live here- it’s because no one has really wanted to live here for so long save for the immigrant working class who make up the cities underclass and the curious onlookers of this burgeoning district.