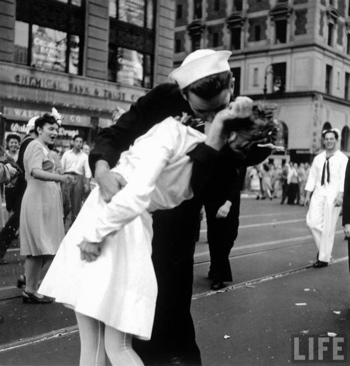 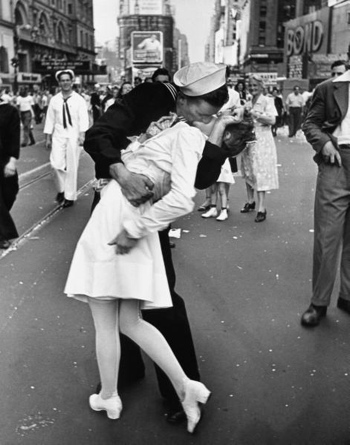 With the passing of Edith Shain, best known as the nurse kissing a sailor in the iconic Life photograph, in Times Square on the  14th of August 1945, at age of  91 comes the definitive end of an era that once heralded the American cultural landscape. Forever the token girl and hope of our collective hopes and joys Edith symbolized what for many would be the end of all wars and the beginning of great national prosperity. And for a while she did until as a nation we found ourselves shortly embroiled in a series of covert wars- the cold war, the Korean war, the Vietnam war, our involvement in Latin America in the 1960′ and 70’s with the Arabic world in the 80’s to the latest wars been fought in Iran and Afghanistan where last time we checked there were no kissing nurses but perhaps other grizzly scenes.

How sad, that the death of Edith Shain in some way symbolizes one of our few remaining icons that linked us back to another consciousness to our current ‘no end in sight’ war. One can only wonder whether our nation could ever live the same rapture it once lived and experienced once the Japaneses were defeated. It was a moment it seems so long long ago. If only Edith could have stayed with us a little longer…A kiss back to you Mrs Shain, farewell.

As for the soldier in the photo Edith had this once to say-“In retrospect, I should have said, ‘Hey, wait a minute!’ and gotten his name and number.” Unfortunately she never saw the sailor ever again, but that’s perhaps why we adored Mrs Shain so much, because it was never about a particular love affair, it was about one particular afternoon when the world set aside it’s inhibitions and came as one.