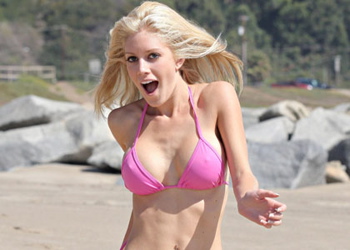 Man, where the hell are the MTV cameras when you really need them?!

Major drama is going on between our favorite couple Heidi and Spencer. The fake boobs, fake lips, fake blonde woman we all know as Heidi Montag Pratt has hired a private investigator to spy on Spencer not only because she thinks he’s been cheating, nope, she also has suspicion that he’s stealing her money and spending it on a new lady friend.

But it’s not just Heidi who thinks her spouse has been stepping out on them, Spencer has reason to believe that Heidi has been cheating with his own best friend, Cougar Zank, a marine turned actor (go figure) that Heidi is currently shacking up with in Malibu.

So let me get this straight, Heidi has moved out of the home that she shared with her husband Spencer, and moved in with his bff Cougar. Where the hell was this storyline on The Hills?

Oh but wait, the story gets better worse, last Monday Heidi went to seek help from the Los Angeles Sheriff’s department and hired a PI because she has a strange feeling that Spencer has been spending her money on lavish gifts…for another woman!

“Heidi and Spencer share a bank account, and it’s not secret that Spencer has been spending her money like crazy. She obviously knows that she makes way more money than he does, and he knows that too. The divorce definitely should be happening by the end of the week or by early next week, but the separation had to happen first until she gets her finances squared away,”
a source told X17online.

What happened to the Porsche and the Rolls Royce I’ve seen them driving? Am I the only one that thinks the world of Heidi and Spencer is finally starting to crumble? Lauren tried to warn Heidi years ago but she just didn’t want to listen.

If you thought her life was officially starting to suck well think again because Spencer is starting to show his true douche bag colors.

“To make it worse, Heidi has her suspicions that Spencer is secretly spending her money on another girl. Her accountant has recently notified her of some big purchases from a jewelry store. When she confronted Spencer he said he bought himself a new watch. Heidi doesn’t believe him. Heidi’s convinced that another bitch is getting showered with gifts at Heidi’s expense. She’s over it,”

Wow, it felt like yesterday when Heidi was giving her friends excuses as to why Spencer is a good person. Now this ditzy blonde has hired a damn PI because her husband is trying to steal her papers AND she’s homeless. Well, at least Heidi has her 10 13 cosmetic surgeries.

The world is relieved that Heidi Montag wants to once again enlarge her breasts.

Heidi Montag is looking forward to plastic surgery even if it kills you.