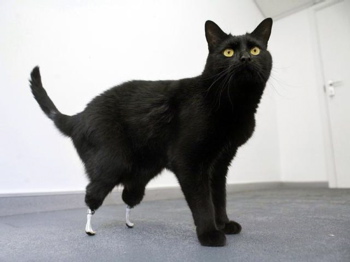 Doctors in Britain have added prosthetic limbs to Oscar the cat, which means going forward Oscar the cat wont have to dream about jumping on your couch and clawing it to smithereens he can now actually resume what he was doing before he lost his real limbs. KTVU explains:

KTVU: After losing his two rear paws in a nasty encounter with a combine harvester last October, the black cat with green eyes was outfitted with metallic pegs that link the ankles to new prosthetic feet and mimic the way deer antlers grow through skin. Oscar is now back on his feet and hopping over hurdles like tissue paper rolls.

Which is really good news, so good that in fact one of our interns is still sitting in the corner whimpering and making out with Oscar’s image.

Together with biomedical engineering experts, Fitzpatrick gave Oscar two metal prosthetic implants, or pegs. Those were attached to custom-built faux paws that are a bit wobbly, to imitate a cat’s natural walk. But first, he covered the brown implants with black tape to match Oscar’s fur.

Fitzpatrick said he and biomedical engineers designed the artificial paws so that they would be fused to the bone and skin. “That allows this implant to work as a seesaw on the bottom of the animal’s limbs to give him (an) effectively normal gait,” he said. “Oscar can now run and jump about as cats should do.”

The veterinarians then inserted the peg-like implants by drilling them into Oscar’s ankle bones in his rear legs. The metal implants are attached to the bone where Oscar lost his paws and were coated with a substance that helps bone cells grow directly over them. The cat’s own skin then grew over the end of the peg to form a natural seal to prevent infections. After rehabilitation training that taught Oscar how to walk again, the cat was on all four feet in less than four months. Oscar’s owners said they hoped his new paws would also further the technology for developing artificial limbs for humans.

Of course we are inspired that Oscar the bionic cat can now leap over walls again, hiss at all the unfriendly people that ever come near him and snuggle up to the vets that saved his life. Oscar, you definitely are one lucky cat.