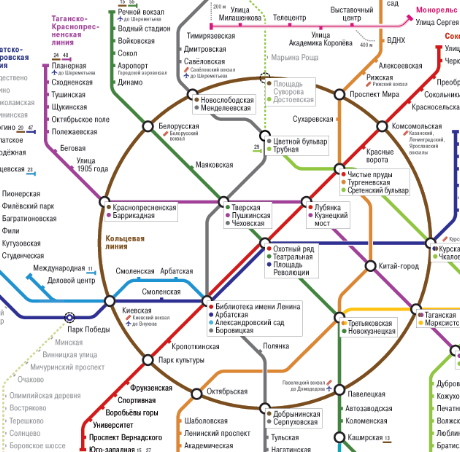 If Fyodor Dostoevsky was alive instead of being pleased that a new subway station in Moscow is named after him he would be naturally gloomy and quite dreary about it. Which pretty sums up what mos

SMH: MOSCOW: A new metro station named after the famously gloomy Russian writer Fyodor Dostoevsky has opened in Moscow despite fears it could attract suicides.

The station, called Dostoyevskaya, is decorated with brooding grey and black mosaics that depict violent scenes from the 19th-century writer’s best-known novels. One mural re-enacts the moment when the main character in Crime and Punishment murders an elderly pawnbroker and her sister with an axe.

Another shows a suicide-obsessed character in The Demons holding a pistol to his temple. If that was not enough to darken the mood, shadowlike characters are shown flitting across the cavernous new station’s walls and a giant mosaic of a depressed-looking Dostoevsky stares out at passengers.

Does this not sound like the subway stop you are going to seek to jump off next time the world means nothing to you and is caving in on you?

The new station has been criticised as ”gloomy and depressing”, and psychologists have warned that its ”negative energy” could make it a favorite spot for committing suicide.

”The deliberate dramatism will create a certain negative atmosphere and attract people with an unnatural psyche,”

Which is like saying freaks exist in all parts of the world and when the day comes to jump off cliffs and subway platforms – Dostoyevskaya will do just well.

The artist responsible for the murals, Ivan Nikolayev, said he did not understand his critics. ”What did you want? Scenes of dancing? Dostoevsky does not have them.”

Dostoevsky, who suffered from depression and a gambling addiction, was fascinated by the existential questions of life, death and religion and is famous for his characters’ tortuous battles with their inner demons.

Themes that most of us try to avoid via gambling, whoring, drinking and occasionally self annihilation at least in the comfort of our own homes.