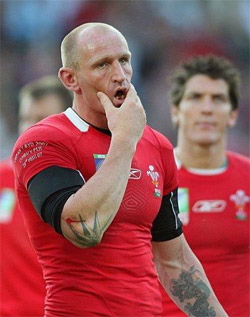 To his credit Gareth Thomas has set an exemplary record as one of Britain’s most astute rugby players. That said when Mr Thomas came out last May to openly declare that he was indeed gay, various fans weren’t particularly impressed. How unimpressed were they? Let’s find out…

“Castelford Tigers are thought to have become the first British professional sports club to be fined because fans shouted homophobic chants. The West Yorkshire outfit have been served a £40,000 punishment by a Rugby Football League operational tribunal after being found guilty of misconduct during an Engage Super League fixture against Crusaders RL at The Jungle on March 26.

Which begs the questions, why are fans so opposed to the idea of Mr Thomas being gay? Are they offended that a man like Mr Thomas should be gay in the first place in a sport that calls for overt masculinity? Are they chagrined by the idea that suddenly the sport has been demerited into a ‘sissy’s ‘ game or are they themselves just sexually repressed?

Said Thomas’ manager Emanuele Palladino, in an official statement: ‘Today has been an historic day. Gareth Thomas is all about delivering positive messages and positive changes, and to that end today was a huge step forward for Gareth and the world of sport. It is not about the fine, but rather recognition that this behaviour from a small section of the Castleford fans is not acceptable in 2010.

It may have sent a good message but the question remains- how is it that such attitudes are still openly so prevalent and will a fine necessarily curtail such obtuse behavior from rugby fans who should know better. Well perhaps one could argue that they don’t know better…and furthermore why did the club allow the on field antics to continue unabated in the first place?

“….the charges against the club are not that there was any chanting, they are that the club failed to take its best best endeavours to prevent or stop any chanting. This the club refutes totally.  The club has a well-established system for dealing with chanting and could not have done any more on the day.  This season the club has been one of the most pro-active in Super League when it comes to promoting a family-friendly environment at the stadium, working hard all season to create an atmosphere within the stadium that is inclusive for all sections of the community.”

Let’s hope this is all a step in the right direction and next time anyone chants, they’ll be chanting for Mr Thomas as he crosses the line to score.