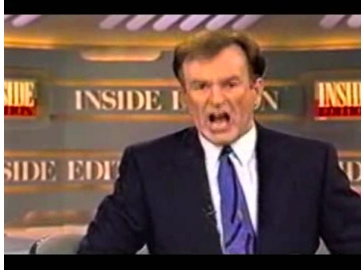 Screaming whack job and born again human being Bill O’Reilly (oddly, the voice of reason over at Fox News), proved once again that he is the almighty overlord of all things moral and just when he decided to equate homosexuals to al-qaeda terrorists in response to a relatively mediocre McDonald’s ad entitled “Come As You Are” in France with homosexual overtones.  I was under the distinct impression that “Come As You Are” was that grungy Nirvana song that had to do with naked baby penis and a floating one dollar bill?

O’REILLY: Alright, so look, they want to make a political statement selling burgers. They’re entitled to it. It will never run in the USA. They’ll never do that.

FOX NEWS ANCHOR JANE SKINNER: Part of an overreaching campaign called come as you are, which you saw at the end there. So they show people in different walks of life. This happens to be their gay friendly ad.

O’REILLY: OK. Do they have an al-qaeda ad, you know, come as you are? You know?

SKINNER: And how do you know it’s not coming to the States?

O’REILLY: No. That would not — I guarantee you that will not run here.

On a side note, I do find it somewhat queer that McDonald’s, a corporate mammoth that has devoted its bottom line to ensuring that it clogs our industrial corridor as much as our arteries, decided to target a demographic well-known for living a healthy and fit lifestyle.

Although no rational person should willingly consent to eating E coli on a bun, the ad was clearly intended to include a group of people who are often the victim of prejudice and exclusion. Due to social stigmas still very prevalent in society, it tactility highlighted the awkwardness that most young people experience when declaring their homosexuality. However, some gay men simply aren’t buying it….

OK. We don’t get it. This new TV ad from McDonald’s in France sets up a situation where a boy gets a phone call from his lover and ends the conversation short when his father returns with the food. In other words, we have a closeted boy who has not told his father about his sexuality. How this serves the gay community or McDonald’s for that matter is a mystery. More

if anything can be taken from this ad, it’s that Bill O’ Reilly and Fox company should be rounded up and confined to a padded cell, with daily administration of Lithium. Hey, that’s another Nirvana song!