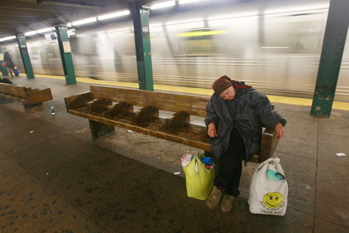 A report released by the  Women’s Center for Education and Career Advancement has confirmed the obvious for us this morning. Yes living in NYC is an impossible proposition. Why? Let’s find out once and for all…

NY Times blog: The report, known as the Self-Sufficiency Standard for New York City, which is released every five years compares the amount of money a family needs to make ends meet with the federal poverty level, commonly used to determine whether families receive subsidized housing, food stamps and other supports.

It found that while median earnings for a family consisting of a single parent, a preschooler and a school-aged child rose by 16 percent since 2000, the amount needed to cover basic costs has risen between 20 and 42 percent, depending on the borough.

So taking out our calculator (which operates on solar energy and saves us a buck and 43 cents with tax) that means if adjusted median earnings rose 16 percent (while that of a writer’s like ours declined by an equally greater amount) and basic expenses rose 20 to 42 percent (ours expenses we bet rose more than that because our girlfriends threw us out forcing us to somehow come up money for rent…) the average New Yorker is in deep calamity (never mind the situation which we find ourselves in). Either way you cut it that’s a deficit of 4 to 26 percent, which even to the most optimistic individual residing in NY, that’s got to mean one thing- poverty is here to stay. Never mind impending annihilation for those of us still pursuing careers as artists…

For example, such a family living in Brooklyn now needs a $29.91 hourly wage to make ends meet, the report found — a 42-percent increase since 2000, driven primarily by housing costs.

$29.91 cents an hour to survive? And we were thinking settling for the $12 an hour plus tips delivering Domino’s pizza on our bikes. Of course that doesn’t include the added advantage of eating as much free Domino’s pizza as we desire which would mean our cumulative salary would rise to $13.12 an hour.

Ms. Reagon said the 2010 data should be used to “streamline” access to the services people need to survive in addition “to education, job training and jobs that provide a career ladder.”

Job training so that you too can eventually become an over educated under employed writer begging his mother to move back in any weekend now.