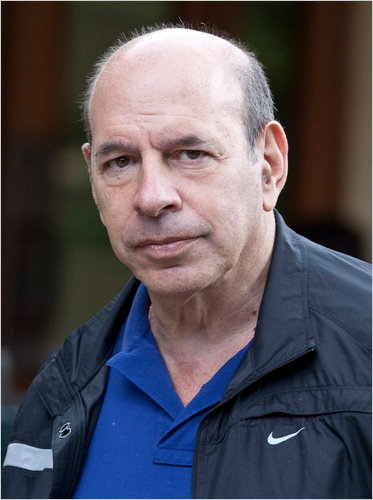 Another Ponzi scheme makes its way to high society.

Here we go again, or is it just the way to do business these days? Yesterday morning financial adviser and new found Ponzi schemer Kenneth Starr to the stars and the jet set was arrested while hiding in his walking closet for defrauding clients to the tune of $30 million. Not bad work if you can get it and of course get away with it.

He was the moneyman to the stars, entrusted with managing fortunes for the likes of Wesley Snipes, Sylvester Stallone and Annie Leibovitz. But when they arrested him on Thursday, federal prosecutors described him as something else: a mini-Madoff who diverted $30 million of his clients’ money to buy himself a sprawling Upper East Side condo complete with an indoor swimming pool and a 1,500-square-foot garden.

Hmm, could you imagine how big the swimming pool would have been if he had been able to get away with say $60 million? But how did our boy Kenny get away with anything in the first place? The NY Times attempts to offer us some clues…

Kenneth I. Starr of Manhattan cultivated business at charity events and lavish parties, bridging the worlds of New York and Hollywood to build a star-studded client list of socialites, financiers, philanthropists, A-list actors and Hall of Fame athletes.

Mr. Starr, who is not related to the special prosecutor who investigated former President Bill Clinton, is said to have made access to his company seem exclusive, much as Mr. Madoff did.

Is this a round about of saying if I am a wolf but dress and behave like the pretty part of town that eventually I will wear them down and get them to give me that what I am after – which ironically is what they want as well- more money, power and access to similar players. Interesting what people are willing to part with when you make assertions that you are a secret hero that only they have recourse to, after all who doesn’t mind being part of the winners club, never mind if they’re not winners at all- looking like one will do fine thanks.

And in the event you want a spectacular case study of how you too can become the next Ponzi conniver, the case below involving Mr Starr and his future target Mr Arabov, a high net worth jeweler (who ironically should’ve known better for previous fraud himself, oh well- blah!) is a stellar one.

The case of Mr. Arabov, in particular, sheds light on how Mr. Starr is suspected of having operated his business. The day after meeting Mr. Arabov at a charity event in May 2006, Mr. Starr went to Mr. Arabov’s store and purchased a $77,000 watch.

Two years after they first met, Mr. Starr told Mr. Arabov “that he had many investments but he only permitted his close friends to invest in them,” according to the complaint.

At least the pain of being defrauded will be soothed by the idea that Mr Starr will be spending a very long time behind bars. A pity about the pool though…