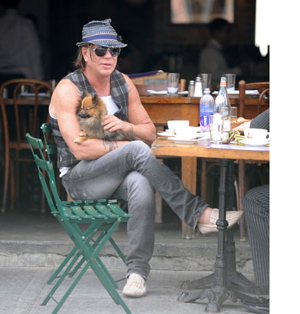 Is the kettle calling the pot black?

Mickey Rourke in case you didn’t know is a big fish in the acting world which is why he feels he can say what he says without impunity. Of course that’s a lie, because even Mickey will tell you still have to watch your mouth or otherwise risk offending the guy who can help finance your so called glamorous existence. That said, let’s have a look at the latest dribble coming out of Mickey’s so called high intellect;

On his feelings for movies stars:

“You can be less than mediocre and be a f–ing movie star. I have respect for very few actors and actresses. Some of them get a lot of acclaim but just because their movie made $200 million at the box office; they still suck. I got no respect for them and I used to let them know it.”

Has Mickey hit on some truth there. Is that like kind of saying that most movies out of Hollywood are kind of vapid and terrible and have mostly compromised any real or imagined artistic virtue? Is that like saying living in America can only work out if you put down your sense of entitlement and accept that at the end of the day what gets things going isn’t homage to aesthetic misnomers but what carrots gets the American public to open their wallets?

Fortunately for Mickey if the American public were forced to spend their money on qualitative produce as opposed to jingo hyperbole he would have long would have been out of a job. So Mickey we’ll forgive you for now and we’ll just wait when your bosses with the money strings tell us to pay attention to you again, by the way- please don’t break your arm again- you need it so you can help snorting all that blow up your brain.