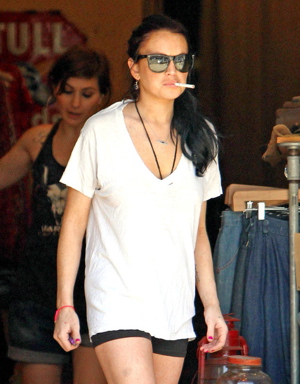 It’s a shit when karma finally catches up with you.

Southern California is preparing for the day that there will be no visible sign of Lilo on the streets.

TMZ explains for us:

Lindsay Lohan has violated the terms of her probation and is headed for a showdown in court next month that will almost certainly land her in jail.

Yowza, so now Lilo has something to really look forward to besides looking for left over cokie bags in the back of her couch.

Lohan — who is on probation for DUI — has not fulfilled the alcohol education requirement laid down by the judge … TMZ has learned.

Judge Marsha Revel made it clear to Lindsay late last year, she must attend alcohol ed courses once every 7 days.  The only exception — if she was in inpatient rehab.  And the judge was explicit … if Lindsay did not comply with the terms of probation, she was going to jail.

The school in which Lindsay enrolled is required by state law to inform the court only if the student is MIA for 21 days.  So here’s the disconnect: The school has not reported an attendance violation … because Lindsay frequently waited until the 21st day to attend classes.

Is that kind of like walking into a grocery store, handpick eating what looks yummy and then telling the security guard who comes to arrest you that you thought the food was on a ‘try out’ display and that you only had to pay once you actually left the store. Well you also have to understand the other 20 days are spent doing important things- like sleeping in until 7pm, cause you know the havoc cokie does to you…

We’ve learned what’s going to come out at Lindsay’s progress hearing on May 20 — that she has habitually violated the judge’s requirement to attend classes at least once every 7 days.

Judge Revel has made it clear to Lindsay — no more chances.  If probation is violated, she’s going to jail … and probation was repeatedly violated.

We asked Lindsay’s lawyer, Shawn Chapman Holley, for comment and received the following email:  “We have received no negative written report from the program and contend Ms. Lohan is therefore in compliance.”

The only thing Lilo is in compliance with is her continual detrimental behavior and in less than a months time Judge Revel is going to look at Lilo, the crack under her fingernails and sent her to a more permanent compliance rehab division- called prison.