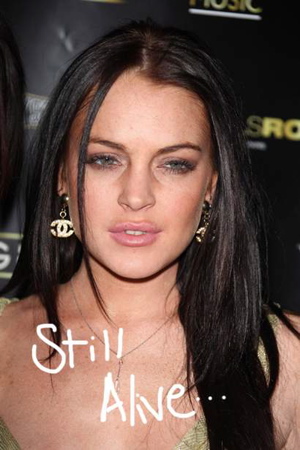 The sadistic glee that makes the media world go ’round.

Media Prepares For The Death Of Lindsay Lohan???

Not the most perfect good morning cheer that our dearest and preferred (number 1) media whore (in NYC) Lindsay Lohan could expect to wake up to. The strange product of the tabloid world as opposed to the film studios who deposed her long ago, the building momentum behind this vanquished soul has now begun to take eerie proportions. On one level one is apt to laugh and metaphorically give Lilo one more kick to the ground as she squirms for legitimacy but a deeper look has us lately wondering if she is the wounded gladiator that the Roman empire can no longer deal with or is frankly done dealing with (after all how much juice can you extract from an over dried left to rot prune?)

By her own admission her life has spun colossally out of control and one on level Lilo who has managed to maintain her social presence courtesy of the media that hounds her (and of course no parasitic relationship would be in place if the parasite didn’t make out from time to time with its benefactor) is getting closer to the edge. Of course that could all just be another propaganda stunt to keep the tabloid water tank running in lieu of the slow week courtesy of passover and the impending Easter celebrations but one does have to wonder.

As Perez (himself a mainstay parasite) observes:

This is disturbing, tragic, morbid and yet not surprising!

Girl, people are already planning for your DEATH!

Sources claim that several media outlets have pre-written obits for Lindsay Lohan, just in case her dangerous and crazy love of pAArtying finally has her meet her end.

“News outlets need to be prepared. However shocking a story it might be, they are in the business of breaking news fast and any preparation that can be done ahead of time is them just simply doing their jobs. We all scrambled when Brittany Murphy and Heath Ledger died and don’t want that to happen again.”

Don’t give these people the satisfaction of the headline, LiLo! Fight it!

Of course Lilo ever up on the news and what we all think of her could only respond by running back to the very media outlets that seek to ritually slam her to oblivion:

The insider said: “If she doesn’t get help soon, she’s going to die.”

However, Lohan is furious about the reports and has reached out to GossipCop.com to dismiss the claims about her deteriorating health.

How ironic in that instead of going back to the studios or joining some theater (she is an actress right?) she clambers back to the beast that seeks to dismember her. What in the end does this suggest about our dearest Lilo and to a larger degree the degenerative state of tabloid affairs?