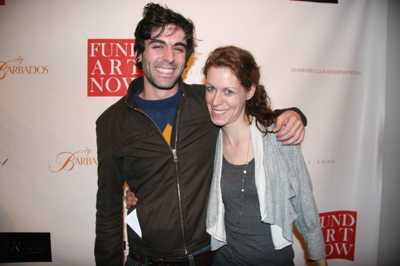 Fund Art Now is a groundbreaking coalition to provide struggling artists across the globe with the financial means to make their visions a reality.  The firm has existed for less than a week, but their mission statement will keep them happily busy for years.

The event’s trappings were almost decadent: Golden furniture, mirror-top tables; scarcely what one would expect at a fundraiser.  Says Guerrier, “We’re working in the confines of what [Fund Art Now] has to offer.”

Once again, Gardy’s efforts have made what could have been a somber affair into one incredible party. “It’s not meant to be depressing,” he explains. “It’s meant to celebrate—the Music, the Art.  You see enough ugly on CNN.   We’re presenting the other side.  It’s not opulent… but it is pretty.”

The presentation began at six pm, with a video reminiscent of We Are The World.  This was followed by performances by Pierre and Nia Huberson; as well as “7.3 [Richter scale] survivor” MikaBen.  It was a touching presentation that won’t soon be forgotten.

Also worth mentioning is the mastermind behind Fund Art Now, one Mr. David Zelikovsky. As CEO and founder, Zelikovsky promises daily events for the foundation, in a format that allows artists to stand by their work when new-comers see it, to make them more comfortable in donating funds.   The agenda of Fund Art Now will be far-reaching, if Zelikovsky has anything to say about it.

Says the CEO, “Every nation has a story to tell.  The artist comes along and boils it down so that people can see it and interpret it for themselves.”

One project of particular interest: making a reality of Anton S. Kandinsky’s solid gold hand grenade. The $12M explosive would be given a world tour before being activated and detonated in some remote locale. “This is just a first step.”

Since January, Hearts4Haiti and its partners have raised over $200,000; with talk of organizing a separate non-profit to directly manage future donations. The work being done is nothing short of inspiring.   I can only say that I look forward to seeing what they come up with next…