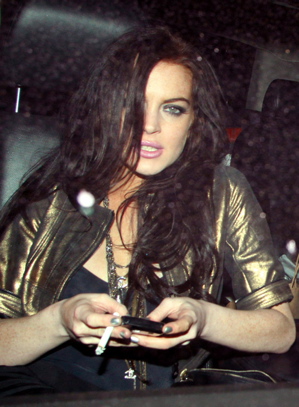 Will there come a day when Lindsay Lohan will be irrelevant?

For some unexplained reason which we’re still trying to figure out, Lindsay Lohan Thursday night was turned away at the door at the glamorous Victoria’s Secret party which was taking place at hot new spot Trousdale, Hollywood.

As reported by Radar:

While celebs like Nicole Richie and Paris Hilton had a blast catching up and Russell Brand flirted with VS super-models Miranda Kerr and Alessandra Ambrosio, Lindsay was blocked at the door, RadarOnline.com has learned exclusively.

Hmm…Was there a misunderstanding or a concerted effort to block this national stage wreck from hijacking this event? The report continues…

“As soon as she strolled up to the door, the rope was quickly pulled in front of her,” an eyewitness tells RadarOnline.com.  “She tried to pass the big bodyguard but he blocked her way.” No matter what Lindsay did, she couldn’t get in!

Lindsay didn’t care and still tried to barge her way through, our eyewitness says. “But the security guys weren’t having it and escorted her to the exit.”

It’s unlikely that the body guards didn’t recognize Lilo as she is omnipresent as blue skies are to the universe. That said our inner feelings are starting to wonder if some phone call was placed from God or some media mogul who has decided that a semblance of decorum might re inspire a positive image amongst disillusioned young Americans and aspiring media whores. Of course we’re sure we are probably wrong but wouldn’t it be a wonderful world once again if young ladies once again behaved with decorum? But then again that wouldn’t sell news would it…?

Lilo decides to sue babies to the tune of $100 million.