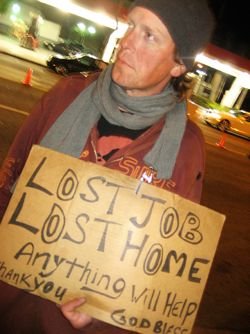 Turmoil and panhandling in Los Angeles.

Being broke, homeless and out of a job is a never fun thing to have to deal with. Of course if you happen to be all of the above your chances of living the American dream become that much more realer when you happen to exist in Los Angeles this Oscar weekend. Let the prostitution begin…

Out of Gawker this weekend comes the ‘tender’ tale of how displaced persons are finally making it work for them in America. It’s kind of like renting a celebrity except it really isn’t. Curious, let’s find out what Gawker who are ever so genuinely concerned about your well being have to say on this topic:

Kevin Jones is 37. He moved to Los Angeles in 1996, with a business degree from Indiana University that he abandoned to pursue his dream of making music. Until the crash, he was a recording engineer. Then, last year, he got fired—”there was no safety net, no family or savings,” he said on a recent night outside celebrity nightclub Voyeur, surrounded by $500,000 Ferraris and Bentleys and a dozen paparazzi. He wore a dirty red sweatshirt, gray scarf and beanie and held up a creased cardboard sign that said “Lost Job, Lost Home, Anything Will Help, Thank You, God Bless”. The sign was lit with a tiny battery operated lamp “so the cameras pick it up.”

Wow. This has this author thinking next time Wall st shills out its bonus to its peons that all of New York’s collective homeless should assemble themselves up and down Wall street with shiny red noses, loud horns and pictures of themselves when they were once respectable in the hopes of catching the attention of some coked up wall st trader who’s feeling uber generous that day. Continues the report:

A month or so ago he(Kevin) had an idea. Around 7pm each night he goes to every hotspot in Hollywood and Beverly Hills—”the hotels, the [Chateau] Marmont especially, the clubs”—and joins the paparazzi pack. When celebrities emerge from their shiny cars, in a cloud of cologne and entitlement, he blocks the cameramen and helps these buffoons in dubloon-stuffed pantaloons enter the venue as best he can. “They tip big sometimes,” he explained, eyeing a sky blue BMW X6, with the Vanity Fair logo on its back doors, just in case. “I don’t kid myself. It’s not because they’re grateful. It’s because it gets them in the tabloids and makes them look good.” Heidi and Spencer Pratt gave him a crisp $100 bill, posing all the while. Brody Jenner gave him $50. Winona Ryder and Jason Bateman were less generous, with $5 each.

See we always knew Winona was always a cheap bitch,( not too mention a thief as well…) but observations aside, we really think Kevin has hit onto a great idea and what works so easily in LA ought to work (in theory) even better in NYC. So here’s what we at Scallywag and Vagabond are advising: that all of New York’s collective homeless alumni should make their way carefully over to Gawker’s publisher –Nick Denton’s house (there or Balthazars where he likes to take his daily chic breakfast) and bellow loudly that they will turn bad angle photos of him to OK magazine, Vainity Fair and NY Post if he doesn’t cough up crisp hundred dollar bills. We’re sure Patrick McMullan and Pest of a Guest (Guest of a Guest) will froth at the mouth and will want to publish these pictures immediately. Of course under no circumstances should the homeless ever get it in their head that the public wants to see images of them. It’s people like Nick Denton and Wynona Ryder that the people really care about.

“I plan to be everywhere this weekend,” said Kevin. We asked him if he had a drug habit or a history of mental health issues. “I used to take drugs when I was in music but now I can’t afford them,” he said.

Drug habit? Thanks to Hollywood and Kevin’s brilliant idea, Kevin can once again resume his drug habit (since we all know homeless people are drug addicts, never mind the rest of America which prefer prescribed sythentic drugs like Oxycotin). For the record the Gawker team were able to offer Kevin $5 for his time.

[Full disclosure, we gave him $5. This probably doesn’t count as paying a source, but still.]