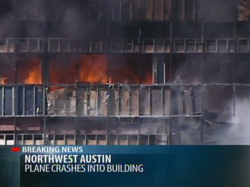 Musician, and man who hates taxes, Joseph Andrew Stack, decided to fly a small passenger plane into an I.R.S. building in Austin, Texas on Thursday morning.  Whereas most older, amateur musicians are pretty calm and collected, Stack had some major suppressed rage.  I guess none of his musician hippie peers filled him in on a little something called marijuana.  Supposedly it relieves stress.  Just ask the state of California, or New Jersey for that matter.

In a six-page statement signed “Joe Stack (1956-2010)” and posted on a Web site connected to Mr. Stack’s wife, the author singled out the tax agency as a source of suicidal rage, concluding, “Well, Mr. Big Brother I.R.S. man, let’s try something different, take my pound of flesh and sleep well.”

Though profane at points, the statement articulated grievances with specific sections of the tax code, corporations, politicians and a local accountant. It appeared to have been written with some deliberation. At one point, the verbs “left” and “abandoned” appear side by side, seemingly an editing choice never settled.” – NY Times

Who’s to blame for the rage?  Stack?  The music industry?  Maybe he just wasn’t talented, and needed a scolding from Simon Cowell.  Come to think of it, imagine how many people Simon is saving from sticking out a long career of music, only to become miserable, broke, and suicidal.  Cheers, Simon!

This didn’t have anything to do with that George W. Bush War on Terror, did it?  This is just a crazy white dude, right?

“The White House said the crash did not appear to be an act of terrorism.” – BBC News

Of course this isn’t an act of terrorism.  This was a good ol’ southern boy, who went off the deep end in a time of unrestrained rage.  Plus, we can pronounce his name, and he wasn’t wearing a turban on the moment of impact.  So, have no fear America.  No terrorism here.

What is terrorism then?  According to the dictionary:

1.      the use of violence and threats to intimidate or coerce, esp. for political purposes.

So, Mr. Stack violently ramming a plane into a building, in order to make his point about taxes, isn’t an act of terrorism?  Maybe there is another definition.

2. a terroristic method of governing or of resisting a government.

Wait, wasn’t Mr. Stack resisting government when he refused to pay his taxes, and instead decided to smash a plane into the Austin I.R.S. building?  Oh, I keep forgetting, his name isn’t Arab and difficult to pronounce.  Let’s digress.  Again, there is no terrorism at play here.  Everybody go back to Facebook, and comment on people’s statuses.