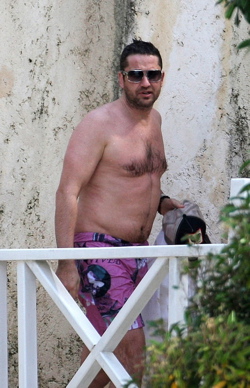 It looks like America is up in arms this morning when it was revealed that star hunk du jour- Gerard Butler- gasp has a love handle, well actually a few love handles. Captured by the paparazzi slumbering through the Bahaman coast line- media and sentry alike were sent running for the toilets when it was revealed that our collective preferred hero is not all that we imagine him to be. The consequences? A media bashing by the likes of Gawker who are offended that a ‘pariah,’ like Gerard could be allowed to exist in the pages of TMZ and our collective conscious.

For so many years Hollywood’s leading men, even of the leading and romantic varieties, have been allowed to fall into a state of disrepair after first seducing fans with their svelte physiques. Just look at Russell Crowe, Luke Wilson, and Vince Vaughn. This was acceptable behavior, to get all big and bloated and still play men who women fawn all over in the movies. It seems like Fatty Butler is putting this to rest.

Mmh, so we guess the buck stops with Gerard Butler? Continues the Gawker reporter who ostensibly must be a hurt female fan or mis informed fag lover-

Sorry, we’re not going to lobby for more lax standards for celebrities. If they want to be famous, they have to pay the price by being famously fit. After all, if we want to look at people carrying a bit of fat around the midsection we’ll start following politics. Other than starring in movies and TV shows and making albums, stars have nothing else to do but go to the gym and eat right. They also have money and the access to afford the best trainers, nutritionist, yoga instructors, or surgery, if it really comes to that. And part of their job description is to be more beautiful than the fatties that we see every Saturday at the mall buying bigger sweatpants.

You hear that Gerard? Gawker wants to buy you a year’s subscription to Bally’s. What are you waiting for? America needs its heros clean cut and fresh and of course lithe.

The moral of the lesson- Gerard should’ve pretended he was Santa Claus or best still the fact that he’s better than you and doesn’t give a rat’s ass. We love you Gerard, but now the gym Fatso!!