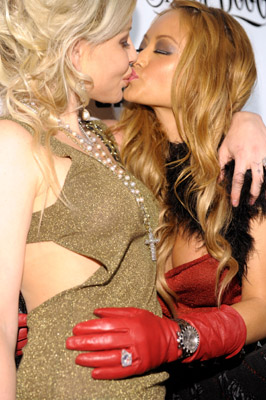 When the madness finally takes a toll.

It’s a sad day on the social circuit when it was reported that ‘mentally’ challenged and consistent ‘freak show’ Casey Johnson was found dead in her apartment this morning. Reports the NY Post which has always had an affinity for freaks and the shiny super lifestyles they espouse:

Train-wreck heiress Casey Johnson — the wild-child daughter of Jets owner Woody Johnson and great-granddaughter of the founder of Johnson & Johnson — was found dead in her LA home yesterday.

Casey, a debutante-turned-party-girl whose recent antics included an “engagement” to lesbian lover and B-list reality star Tila Tequila, was 30.

When even the NY Post has the temerity to announce you as a train wreck in your virtual obituary you really have to believe that this girl was living way beyond her mental capabilities and was probably surfing in some terrain called ‘insanity.’ Of course the obvious question is how did this starlet – sole inherent to the Johnson and Johnson empire die?

TMZ.com reported that Johnson, who had diabetes and was also believed to be taking anti-anxiety medication, had been dead for several days.

Security guards discovered pills in her purse at an event last month, and she flipped out as Tequila shouted, “She’s diabetic, she needs her meds!” sources told The Post at the time.

The reality star told TMZ that the pair had fought just last week.

Of course who can wonder how much turmoil and grief this particular heiress has gone through- from what the Daily Beast recants- she had recently lost custody of her adopted daughter to her mother. Johnson was reportedly cut off from her trust fund by her family recently due to her struggles with substance abuse and her public antics, which included grand-theft charges. TMZ reports that Johnson had previously suffered from diabetic comas.

In any event another one bites the dust, another toxicology report will be on its way and we’ll all carry on – any which way the wind blows…