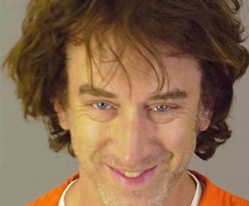 When a douche bag can’t help himself. Sexual impropriety is Dick’s specialty.

Here we go again with ‘Dick can’t help being a dick show.’ The facts as they come from FOX News.

Comedian Andy Dick has been arrested for two counts of felony sexual abuse, while still on probation from his infamous 2008 arrest for pulling down a teen girl’s top.

The attack allegedly happened early Saturday morning in West Virginia, after Dick appeared at the Funny Bone Comedy Club and Restaurant in Huntington.  Dick is currently in the Western Regional Jail, police confirm.

Jail again? Perhaps it’s all part of the comedy routine. Let’s read on…

Is there something up with Dick? Is Dick a lonely guy looking to spread his type of ‘special friendship,’ or is Dick just the type of guy who doesn’t understand that some course of behavior is unacceptable regardless if you are a Hollywood namesake. Continues FOX;

In 2008 Dick pleaded guilty to misdemeanor battery and marijuana possession in California.  A 17-year-old female said an “extremely intoxicated” Dick walked up to her, grabbed her tank top and bra and pulled them down and exposed her breasts, according to a police statement.

Dick has a reputation for crude behavior. He has reportedly exposed himself to audiences at least twice. He was forcibly removed from the set of the show “Jimmy Kimmel Live” in 2007 after he repeatedly touched guest Ivanka Trump without her permission.

Wow, permission. Would that be asking a little too much from a dick like Dick? Comedy is always fun but never when the joke is inside the pants of the person listening to the joke. Maybe it’s time Dick is moved off stage and into a facility called the ‘funny farm.’ We’re sure he’ll have a captive audience waiting for him…