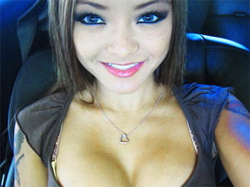 When lifestyles of the rich and famous just don’t work out.

Looks like fallen socialite and recently deceased heiress Casey Johnson lived a very tumultuous lifestyle that has suddenly caught the eye of every shutter bug in the province of tinsel town.

Reports the NY Post who has a real hard on for Casey:

If there was ever a poster child for the notion that money can’t buy you happiness, Casey Johnson was it.

Being born into a life of extreme affluence with nearly endless options, Johnson was the classic poor little rich girl — beset with health problems and inner demons that ultimately overwhelmed her.

Of course that’s a sober assessment in relation to what Gawker came up with:

Before their engagement, both women were minor tabloid figures who sailed into the limelight with sordid, humiliating tales of crime: Tila as the victim of a confusing domestic violence case, and Casey as the accused perpetrator of a scandalous psychosexual theft. When the chips were down, the women found each other—then lost each other, in mysterious circumstances amid a torrent of contradictions.

But we thought we would reserve the most amusing assesment of life as a billionaire junkie on skidrow courtesy of star fuckers-D listed.

Casey’s name was recently all over the internet for a few reasons. The first one was because she was arrested for allegedly stealing a bunch of her ex-girlfriend joo-ree. And just a few weeks ago, Casey and Tila Tequilaannounced they were engaged to be married. Casey was also working on getting custody of her adopted daughter back from her parents.

Tila Tequila told TMZ that she had not heard from Casey since December 28th. The two had a fight that day. Tila tried to call Casey the next day, but her phone was shut off. Tila hasn’t Tweeted anything yet, but you know her page is about to explode.

In the end who can really make sense of a life that careened out of control and really isn’t this what you kind of expect of a media anti- heroine? Oh well, let’s see how Tila Tequila and the media mob hold on over the next few months. We think the story has just begun…