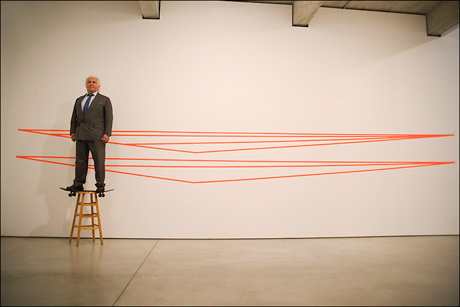 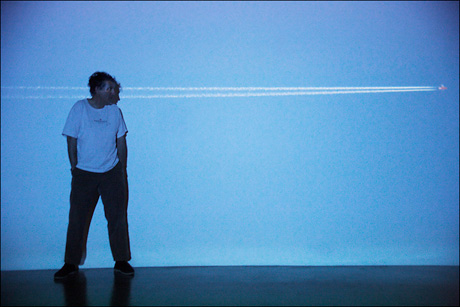 F: I saw you worked with Randy Moss as a photographer. Tell me what was that like?

S: That was five years ago. Racial relations in America were not the way they are now. Now, this guy is like a gazelle, a beautiful athlete. You look at him, you’re like “he’s beautiful.” But, he has had a lot of problems, so he’s guarded and protected. He wanted no part of anything creative, anything avant. So, he turned down my first few ideas. The concept ended up being Randy Moss wearing fishing waiters. Right as we started shooting it started to rain. I had no assistant. When you have a celebrity portrait, it’s tough to get what I would like to call the ‘one.’ I have war stories of ridiculousness.

F: Can you give me one example?

S: (laughs and thinks for a moment)

F: How about Donald Trump?

S: That was one. That was for a photo spread in German GQ about billionaires. I thought if I’m going to be shooting a portrait of Donald Trump, I want to make sure it’s legendary. Their direction to me was to photograph his things, his buildings, his boat, and combine that into one collage. What does that mean? Does that mean anything? You can do that in your sleep. I thought what if I take landscape shots from the top of the Empire State building and then project those images on top of him. Then make it look like he was flying above the city, and that would be sort of fun. So, I bought a pass to the top of the Empire State Building and took shots: north, east, south, west. Now, I had these costumes from a masquerade ball I just had. So, I thought what if I used these wings I have on Donald Trump. The next morning, I was in his office. I set up the projections from the top of the building on a white backdrop. He comes in (never met him before), “What do you want me to do?” I told him to stand in front of the projection and put on the wings. Trump wouldn’t do it. (Even after several convincing attempts.) Finally, I upped the anti. I said, at one point you’ll be sitting next to me at supper and you’ll thank me for putting on these wings. He paused for maybe ten seconds. Silent. If the guy walks out, I’m screwed. After ten seconds he goes, OK which one do you want me to put on first?

F: The risk paid off.

S: After that I was able to shoot him in Devil, angel, and fairy wings. Later on he ended up sending a letter to the editor (of German GQ) saying he liked the photographs.

Sam and I continued our chat about his life and career, and the more he spoke the more I discovered the all out versatility of the man. He flew relief missions during Hurricane Andrew at the age of 13. The same age I discovered Nintendo 64. (Although, Sam did admit that he dabbled in video games as well.) Not only that, he captained the Syracuse lacrosse team to a national championship, an achievement he claims was a long time dream of his. With an option to go pro, Sam decided to pursue the arts in New York City. I would say that it has certainly paid off thus far, and he’s still a very young man. They say if you put your mind to something, you can accomplish anything. As far as I can tell, Sam has mastered this ideology. His next feat? Metal sculpture.

While walking out through the lobby of the Chelsea, a stranger complimented his tape sculptures. Of all the criticisms that may arise from his experimental work, a simple moment like that makes it all worthwhile for the humble artist. 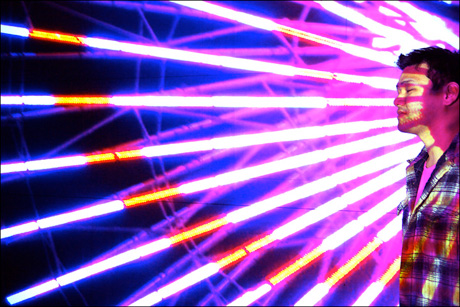