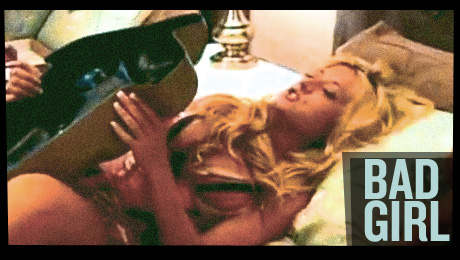 There are a lot of things that go on in reality TV that you never find out about, that is until you become a reality star. Enter Kate Squillace who until a few months ago was just minding her own business when on a whim she decided to fill out a job posting she came across on Craiglslist looking to hire ‘audacious, crazy out of control strong female character types’ for the fourth season of Oxygen’s “The Bad Girl’s Club.” Within days of sending her application she was being flown out of her native Boston (where she studies at Boston College) into the capricious terrain called Los Angeles. Without knowing it Kate Squilace was just about to become a household name and the baddest girl TV had ever come across. With the show experiencing it’s highest ratings ever and with Kate suddenly receiving endorsement offers, an appearance on the Tyra Banks show, 3000 facebook friend requests a day and with her newest single with famed music producer (and his own bad boy) Chris Young, life has suddenly gotten very heady…

SCV:  For those of who don’t know what is the premise of “The Bad Girl’s Club.”

KS: Mayhem. It’s about getting as many as disparate personality types in one room and watching them self combust. Essentially it’s a sequestrated pad for 7 girls who come from all different walks of life and the world watches how they get along.

SCV: Or rather annihilate each other?

KS: That’s an understatement. It’s inevitable when you get 7 very outspoken girls together, force feed them alcohol every day, have them on set 24/7 for 10 weeks with heavy overhead spotlights that things are bound to erupt.

KS: I think in the spirit of showing us out of control and probably so we could be less inhibited…

KS: It’s a social experiment, to see if you can take a rich girl, a bad girl, a trashy girl and a society girl with strong outspoken personalities and see how they get along. How they mix in the jet set aspirations of Hollywood.

SCV: Which girl are you?

SCV: What’s the appeal in a show like ‘The Bad Girl’s Club?”

KS: I think it’s the intrigue of a life that most people only ever hear about but never live and only fantasize about.

SCV: I understand the producers encouraged the girls to express your opinions, to never hold back what was on your mind.

KS: That’s one way of putting it. I think what personally frustrated me about the show is the way we are portrayed as freaks who go around misbehaving, pulling out each others hair and making out with buff guys in strip bars. If I ever said something or did something that was sensible or contained that would be immediately edited out.

SCV: Why do you think that’s the case?

KS: It’s television, and television is about drama and chaos. I don’t think the show would be so successful if all it showed was 7 girls getting along real swell.