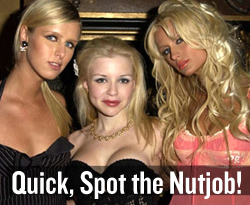 Here comes a tearjerker for all of you out there looking to sink your teeth into. It seems distressed junkie heiress Casey Johnson went a little overboard lately when she bit the hand that feeds her. (Isn’t that the way it always goes, kids?)

Casey Johnson, the troubled heiress to the Johnson & Johnson fortune, is under arrest for grand theft after she allegedly stole dozens of pieces of clothing, jewelry and other items from a supermodel who had befriended and tried to reform her.

Jasmine Lennard said she was away from her Hollywood home for six weeks and returned 12 days ago to find her apartment had been plundered.

Mmm- that’s not very friendly. What provoked this behavior? After all, we know super models should never have to be subjected to this type of inconvenience (unless of course they are stupid enough to invite it).

She told The Post that the thief stole jewelry, shoes, 600 pages of a legal document, clothing — even her underwear.

Now this is getting yummier and more appealing. The type of trash that whets our appetite and gets us wishing we were used supermodels, oops we meant used vibrators…

The supermodel then put two and two together and realized nutter Johnson was somehow involved when she suddenly got the following text. Brace yourselves kids-

“There’s a problem, Jaz, Casey Johnson just got into bed with me and she is wearing your underwear,” the message read. “You need to call police. There are documents here, your shoes and your clothing — you need to call the police.”

Johnson known for getting her way with the ladies had the unfortunate instance of meeting the wrong hot bitch;

“I am the only person who helped this girl, and I believe she was obsessed with me, and thinks in her mind we had some kind of affair. That is not the case.”

She said she was outraged: “She breaks into my Hollywood apartment, masturbates in my bed, has a shower in my bathroom, takes every thing in my apartment.”

“This time she really messed with the wrong lady. I am going to teach her a lesson,” Lennard vowed