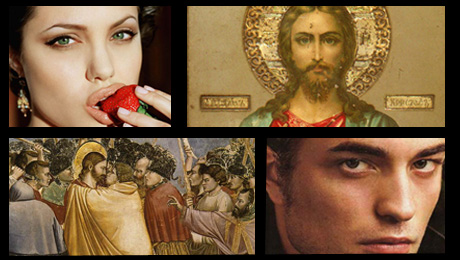 Christianity, Catholicism, Buddhism, Judaism, Kabbalah, and now Celebrity-ism? In the day and age where the 9 o’clock news reports on celebrity scandals rather than issues that occur around the world, newspaper headlines read ‘Britney’s Meltdown’ instead of ‘War in Iraq Still Not Over,’ and people turn to celebrities for hope and inspiration, is celebrity a new form of religion, with celebrities themselves being our Gods, and the tabloid magazines our bibles?

It is unquestionable that we are in awe and engrossed with celebrities, but has anyone ever really questioned it? Why are we so obsessed with them? It’s because they are more shiny, more beautiful, and more wealthy versions of ourselves. And through them, we can escape from our real world and live vicariously through their lives, as reported by the media. If a celebrity is spotted on the street, people either run towards them in tears asking for some kind of keepsake, or look away while catching small peeks through their peripheral vision, as if the celebrity have dazzling auras that are too bright to directly look at. If they want a whole new wardrobe, the designers will dump them with freebies. If they want to eat at a restaurant with a wait-list of several months, the restaurant will literally strap on a chainsaw and build a makeshift table out of lumber. They want front row seats to the sold-out World Series? The tickets will somehow magically appear and be placed in their hands. People bend over backwards and then back upwards for celebrities, because for better or worse they have become our defacto approximators of what is tasteful, healthy, hip, congenial, savory and desirable because they themselves are desirable, or rather to be succinct their state of being has become desirable…

With this relentless pattern, it’s no wonder that they are placed so high up on a pedestal forcing us to jerk our heads up and admire them. Like Gods who are so almighty that we could never reach their level, celebrities too have also become unattainable beings.

With celebrities we are presented with the interesting dilemma that we see them everywhere and yet we never actually see them anywhere. They exist in perpetuity and in yet they hardly exist at all. From cardboard boxes, celluloid screens and pasta sauce bottles they are omnipresent, a compelling image loaded with conjecture and sublimation  never mind the fact how we throw them away once we are done consuming them. Rumored to exist, and rumored to be larger than life but the first to deny the rumor ever existed. A public deity that reinforces stock values, to be administered in healthy doses and consumed in daily sound bites the way one consumes the flesh of Christ or drinks his blood at a Sunday church gathering…

Beyond our reach, our eyesight, even though they are constantly omnipresent, they aren’t tangible nor can they be spotted on a daily basis on the streets. To see them existing on a base level is never an option, for they do not stoop to pick up after their dogs on the street, or frequent 99 cent stores, such things can never exist for them or rather such ideas of them can never exist  for us and yet we are strangely perversely drawn to images of them behaving and acting in a way that  would normally automatically discount most highly revered deities. Deities never err, do cocaine lines, cheat behind their wives or steal champagne bottles but somehow we are intoxicated by the very idea of them as being as human as us and yet at the same time outraged and incensed by their audacity to fail to remain on their(our) carefully constructed pedestal.

Rather than viewed as normal human beings with a career that puts them in the spotlight, they have essentially become manufactured and polished products of Hollywood. When we see a celebrity carry herself in a certain way and we feel like we know her, how can we be so sure that this persona actually even exists? In that case, tying it back to religion, how can we be so sure that Jesus, Mohamed or Abraham even existed? It’s because we choose to believe that they are real. We paint our own portrait of them from what we are told and what we read, and thus truly have faith in their existence. Just like we can’t say for sure that the depiction of that celebrity is genuine or real and not fabricated by their management team, we choose to believe that her portrayal is authentic, the way we choose to believe the bible, koran and the torah are real.

Packaged to represent perfection and be role models, celebrities exist so people may revere them, aspire to be like them, and also turn to them in times of despair. Perhaps not the best example when talking about Gods, Marilyn Manson the musician is God in his own way to his legion of fans. With his lyrics and his songs fans are given refuge to rejoice in the fact that they are not alone in their situations. As he stated in Bowling for Columbine, ” When I was a kid growing up, music was the escape. That’s the only thing that had no judgments. You know, you put on a record, and it’s not going to yell at you for dressing the way you do. It’s going to make you feel better about it.” Manson and other celebrities alike presents us with the opportunity to enter a sanctuary through their songs or movies, which in turn makes us believe that following and worshiping them as our leaders will ease our pain and provide us with assurance.