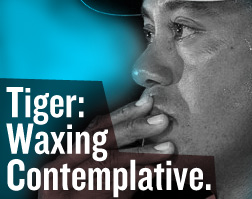 Everyone else has had their say about the misadventures of Tiger Woods, and now (rejoice) it is the turn of the psychologists.

“Men will be men,” says sports psychologist Richard Lustberg. “Well-to-do men who can afford a certain lifestyle, travel this way – there is gambling, eating, and, of course, women. There are businesses that cater to them specifically … Men who sleep with lots of women often have intimacy issues.”

Well, thank goodness we finally have a professional to deliver those pearls of wisdom.

The whispers circulating this week are ones of sex addiction, and while it may seem that this is a label Woods would want to avoid, it may well be his get out of jail free card. If he stands up in front of the world and follows the infamous words “I’m Tiger Woods” with the phrase “I’m a sexaholic,” then we’ll all have to forgive him, won’t we? Because if he’s ill, if he’s an addict, then the poor man really couldn’t help himself.

“Once you medicalize it, once you call it ‘sex addiction’ then the guy has an excuse; he gets a pass,” Judy Kuriansky, a psychologist an sex expert told ABC News. “There are a lot of people out there calling him a sex addict, but you have to ask is this really the behavior of an addict, or is this the behavior of a very rich, powerful, celebrity, man, who has been given lots of opportunities?”

One of Tiger’s alleged mistresses told a British tabloid, News of the World, that Tiger had “an insatiable sex drive”.

“Sometimes I looked like a rag doll after we’d made love,” she said. “He really did like it quite rough.”

We’re not sure love had much to do with it, but then again, we’re not convinced that sex addiction did either. In fact it sounds rather more like opportunism. Either way, we’ll be watching with interest to see how Tiger plays this one. After all, America can’t help but love a recovering addict.