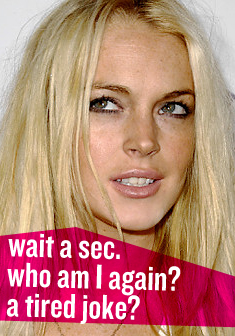 Does being a hot mess entitle one to free drinks? Dilemmas in Hollywood…

Looks like Lilo has gotten herself into trouble again. The latest fiasco (yes, we can never get enough because we’re serious ‘Lilo-phytes,’) occurred when the blonde ditz took it upon herself to grab two (very expensive) bottles of champagne from the kitchen and down the yummy stuff with one of her gal pals at LA hot spot the Crown Bar and then have an audible mental breakdown when she was eventually presented with the bill. The audacity! Of the bar that is…

“She was yelling at [the bartender] and screaming profanities at everyone,” said the source. “The bar insisted she pay, so she had to call a friend with her credit-card information.”

Why is the world picking on Lilo? And of course it gets better or just weirder/more hysterical.

LiLo’s anger soon turned into worry when the actress reportedly left the club around 2:30 a.m. in tears.

“She was crying and wanted to go home,” says an onlooker. “She kept saying ‘I don’t pay for drinks! This is ridiculous! I’m freaking out!'”

Really. What’s wrong with these people in LA? Don’t they realize Lilo is our national comedian and as such is entitled to complimentary blow and grog. Who caress if you can’t name the last job she has held, acting or otherwise? Which ever way you take it you have to admit life is really unfair and Lindsay, you silly ditz, we feel for you.

NY Daily News
No five-finger discount here! Lindsay Lohan has ‘meltdown’ when asked to pay for drink bill
World exclusive- Lilo rumored to be dating Heath Ledger before he died.
Lindsay Lohan no longer a lesbian for the time being.
Lindsay Lohan’s comeback as a human being is perilously close to failing.
SHARE
Facebook
Twitter