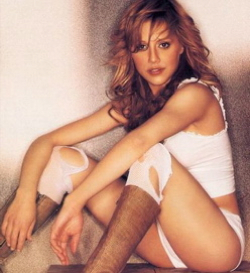 A minute must have passed before TMZ were next to Brittany Murphy’s death bed analyzing ‘exactly’ what had led to her death and what her death meant for America and by implication whether her recent lapse in work professionalism was tied to the possible bogey man called ‘drug addiction’ that has seen a number of notables in the entertainment industry leave us. At first the implication was that the ex star of such films as ‘Clueless,’ and ‘8mile’may have been dabbling with cocaine which made sense if Brittany Murphy went into cardiac arrest.

Now reports have it (from the same source who is keeping vigil on Brittany Murphy’s post existence…) that in fact she was taking ‘prescriptive’ drugs for flu like symptoms that were plaguing her before her untimely death. Goes on TMZ-

Sources say various prescriptions were found in the home — written for Brittany Murphy, husband Simon Monjack, and Brittany’s mom. One source says, “There were a lot … a lot of prescriptions in the house.”

Adding fire to speculation that Brittany Murphy was a bad girl (because America will always love and loathe bad girls...) is the notion that Brittany Murphey was recently fired from a film project and that her husband Simon Monjack ( a nebulous character according to the paparazzi who are feeding on his gizzards…) was against an autopsy being conducted on his wife- which led to the collective media wondering if there was something that needed to be hid from the public.

Gawker, another gossip site which specializes in hyperbole and character assassination has this time taken the aloof route of trying to reconstruct what the media world has come to say of the recently deceased actress. In a telling mode of compelling journalism (yes Gawker- we are charmed and surprised…) the piece ends with the following;
But Brittany’s most memorable postmortems will likely be of the tabloid variety: grisly details from the scene of her death, “sources” who come forward to say they saw it coming, speculation about “self-destruction,” “enablers,” and the price of fame. And so Brittany Murphy, it seems, will die as she lived: ambivalently, a public figure that no one ever quite figured out how to pin down.
It is this symptom of trying to collectively understand how a girl who came from small town regional theater and was able to land gripping movie roles, date hunks like Ashton Kutchner and then somehow wither away that will confuse and torment a public at large that at the end of the day seeks to assiduously avoid a fate like Brittany Murphy’s even if it is collectively glued to her postmortem fate.